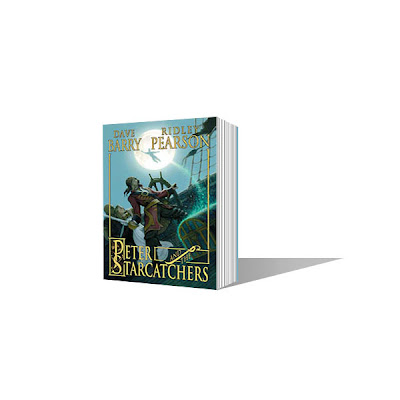 When you think of the boy that never grows old, it is intrinsically Disney...

The classic animated film is the definitive adaptation of the J. M. Barrie's classic novel that has defined how the story has been seen for half a century. There have been many versions since that have failed or succeeded to varying degrees. The best has been the 2003 live-action version directed by P.J. Hogan. Steven Spielberg, whom I always thought would be the perfect person to make a version of the film made his own, very flawed take on the tale with "Hook" back in the early 90's.

And then there is Dave Barry and Ridley Pearson's "Peter and the Starcatchers."

One of the first films under the Alan Horn regime that was optioned before he came in, but green lit under him now has a director: Gary Ross. Many in Hollywood were wondering what the next film the director of "The Hunger Games" was going to do next, and now we know. This reinterpretation of the classic story told as a prequel to how Peter came to Neverland is now one of the projects being lined up for production in 2013. Ross is an appropriate director for the project and can bring the right vision of innocence and open possibilities that the classic story evokes in generations of people.

Now, if someone will just film the "Nevaland" script that floated around Tinsel Town earlier in the decade...

The Starcatcher film will be based on the successful Disney Theatrical version of the books, written for Disney press by Dave Barry and Ridley Pearson.

And while I enjoy the Disney cartoon version, the definitive version is the 1924 silent film, which Disney parroted quite a bit on a lot of levels.

I found Starcatchers so misguided that I didn't bother reading the others. It tried to explain all of the magical elements of Neverland, which seemed to make them much less magical. Like Lucas and the Midichlorian's in Episode I, in Starcatchers, everything from Fairies to Mermaids was mutated into their present forms by "Stardust" or whatever they called it (it's been a few years since I read it). Rather than having some bigger idea at it's heart, it felt like the author (or Disney behind him) intended just to flesh out the original story as much as possible so that it would be a marketable franchise, with little respect for what made the original endearing. And apparently it worked. Sigh.

Everywhere I go around the net, people diss Hook left and right. Personally, I did not find the movie to be bad at all.

The play, while a moderate hit, does the same thing, Mr. Unbleat....and they did the same to the musical stage version of Mary Poppins. They over-grounded the psychology and beat it to death with lame musical numbers and mind-numblingly banal lyrics.

Imagine, Mr. Banks ignoring his children in favor of his career was deemed not GOOD enough for the stage version. So they gave Mr. Banks a lame reason for treating ignoring his brats: he had a mean nanny. How utterly DUMB.

Disney should stop trying to explain magic, and make the characters more interesting and believable.

THANK YOU for remembering the 2003 live-action version! Rather than the Disney animated film, I would say THAT live-action version is the definitive version. Instead of Disney's mermaids being little more than jealous schoolgirls, Hogan kept the darker elements of the story, including the crocodile as a menacing presence rather than just a cartoon character.