Are You A Pooh Or An Eeyore? 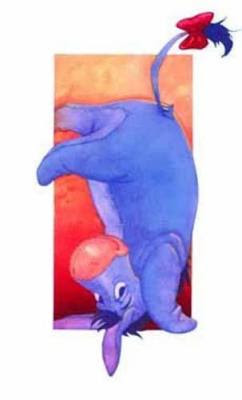 Blue Sky got a lot of comments and e-mails about our "Success Of Failure" posts. It seemed to strike a nerve with many people. That got me thinking about the way Disney fans perceive the company and how it resembled the way Wall Street's perception of the stock market is. You know how investors deal with ups and downs?

The Bulls and the Bears.

While the Bulls tend to take an optimistic view, Bears tend to take a pessimistic view. So an analogy to this regarding Disney, using Disney characters, would be in order. Although in this case, it's my belief that the best character to use for Disney's version of a bull would be a... bear.

A Pooh Bear, actually. Winnie the Pooh represents the bullish view on Disney because of his positive view toward everything. His perspective of the world and how he approaches it are all from a belief in all that is good. He never says an unkind word and always stays positive.

Now for the negative view of things, the ones who are always down on the company or wishing for Uncle Lasseter to fail... it's an obvious choice.

Hehe... sorry, but I thought that was funny. A donkey, actually. Eeyore to be exact. While the little stuffed animal is a sweet character he is also completely the opposite of Pooh. Always negative. Always looking at everything from the perspective of what could go wrong and how nothing ever goes right. Couldn't you just see some of the comments made about "Ratatouille" being said by him?

So there you have it. Wall Street has the Bulls and the Bears and we Disney fans have the Poohs and the Eeyores.

So the question I have...

Which are you?
Posted by Honor Hunter at 8:37 AM

Labels: Bulls and Bears, The Many Adventures Of Winne The Pooh, Wall Street, Walt Disney Company

I'll go with Rabbit. I view most everything with cautious optimism.

Wait Rabbit seems to be almost as negative as Eeyore. How about Christopher Robin. I don't know. I am in the middle of Eeyore and Pooh.

I never thought I would say that.

Rabbit would be an optimistic cynic or a pragmatic critic, I'd say.

He falls short of either camp, so I think Honor's terms seem to apply.