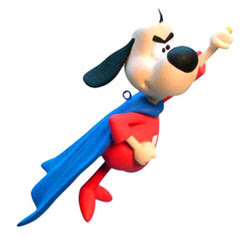 This weekend, secret agents were more powerful than super-heroes, it seems...

The number one movie at the box office was "The Bourne Ultimatum" staring Matt Damon as the uber-spy with a double dose of conscience and no memory. He was definitely no Underdog in movie theaters with $70.1 million on opening weekend. At number two was the Bart Man himself, the "Simpsons Movie" added up $25.6 million in grosses. Fox has been tooting that its film opened bigger than any Pixar film ever. All I have to say is... 2D animation is dead. Dead I tell you! Hear that, Michael Eisner? Disney's very own "Underdog" brought in an unheroic $12 million at third place. Michael Bay's robot love-fest, "Transformers" finished the weekend at eighth place with a little under $6 million for a domestic total of $296 million dollars... just shy of the magical $300 million line. It should clear that sometime this week.

Pixar's "Ratatouille" opened up in France and Spain this weekend to the top spot, knocking down the "Simpsons Movie". Remy has made $188 million in America so far. The final tally for its international take isn't in yet, but over the next month the film opens in many more countries so the total gross should start to rise quite a bit with the uptake in foreign debuts.

That little movie with the pirate plot-line, "At World's End"... perhaps you've heard of it? Its slowly moving in on the billion dollar mark. It may yet equal the grosses of the second film. Jack Sparrow's one lucky pirate.

Disney doesn't have another major film for distribution till the Fall with "Enchanted". The other great thing about the coming Autumn is the resurrection of something not seen since 1953... Disney Shorts! Goofy's career rises from the ashes in "How To Install Your Home Theatre". I'm actually more excited about this than most of the films coming out later this year.
Posted by Honor Hunter at 8:06 AM

Once again, please learn the difference between "it's" and "its". It drives some people crazy, including me!

And not to be a grammar jerk (I'm enjoying the site a lot, too - I only recently stumbled on you), but it isn't 'The Simpson's Movie'. No apostrophe in Simpsons. Plural words don't have apostrophes in them.