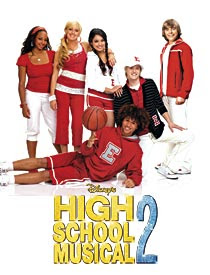 While Disney expected to get huge numbers from the debut of HSM 2 on Friday, it didn't expect the kind of numbers that actually came in...

17.2 million viewers stayed home on Friday night to watch the sequel. This makes it the most-watched cable telecast ever, beating out all sports telecasts, television movies, mini-series and long form shows.

That half a billion that the Walt Disney Company has made off this franchise so far is going to get a lot bigger. The CD's, books and other merchandise the Mouse has planned are going to just fill the coffers of the company up to bursting. When the third one is released in theaters it looks like all those Disney television stars are going to finally become movies stars... it's just a given. Of course, that means their shelf life on the those Disney Channel sitcoms is going to rapidly fade.

Now if the Suits over in Burbank can keep Zac Efron's head from exploding due to his gigantic ego, maybe the entire cast can come back for that film? Jason, as his agent... perhaps it's time you talked to your client and gave him a little attitude adjustment so he doesn't flame out too quickly and become the teen equivalent of David Caruso. Just a thought...
Posted by Honor Hunter at 9:20 AM

Honor,
is it true that Zac is that difficult to work with?
Hill wrote some stuff about it, making him out to a total diva, but you can't believe everything Hill writes. On the other hand, I have heard from plenty of others and read elsewhere that corroborates what he wrote. Some inside Disney say he is their most difficult star, or at least teen star, they have ever worked with.

hmmmmm...wonder what the rest of the main cast feels about him?
In every interview they always talk as if they are always "one big happy family" and that everything is so perfect...I highly doubt that.

You had me laughing very hard on this one.

"Now if the Suits over in Burbank can keep Zac Efron's head from exploding due to his gigantic ego, maybe the entire cast can come back for that film?"

This is soooo true! He said somewhere that he probably wouldn't be coming back for a third film. Ummm........hello! Zac, you are not a huge star yet and anything that will keep you in the media is a GOOD thing. A lot has been happening for him lately, and Hairspray probably got him thinking he wants to do more "serious" roles. He just doesn't realize he might not be there yet. I say, unless something better opens up at the exact time the shoot the movie, he better do it.

You were right on Honor!

He's already got two more films in the pipeline; 'Speedracer'and 'Seventeen'. On top of that, just about everyone from 10 - 20 years old knows him, and that was enough to catapult people like Lindsay Lohan into stardom. I'd say he's already there.

Ummm... where do you get your info? Zac is not in Speedracer. Are you confusing him being in it with him being up for the role? His behavior is one of the reasons he didn't get the role by the way.

Emile Hirsch is playing Speedracer. Zac is not on the cast unless he's in a very small role which, given his ego, he wouldn't accept anyway.

One of my friends has to deal with him. He's a jerk and thinks the world revolves around him. If you want a clear image of what he's like when the camera is off then just imagine Ashley's character in HSM in male form. That is Zac Efon.

Let's just all agree that he's a cute, stinky little turd that thinks he's all the sh@t. K?

Good, we don't need to argue the obvious.