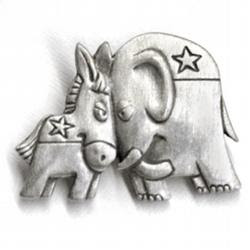 It looks like Touchstone Pictures will co-finance and distribute in America, Kevin Costner's new film "Swing Vote", which is being produced by Costner's Tig Prods.

The story is about Bud Johnson(Costner), an average working-class single father who is thrust onto the world stage after the presidential election comes down to his single vote. Lots of people want him to pull the lever for their guy... think there'll be pressure on him to pull the lever?

Dick Cook, Walt Disney Studios Chariman said: " 'Swing Vote' is a timely and heartfelt story that is sure to touch and entertain moviegoers in the same way that some of the classic films by Frank Capra have done in the past". Cook has a great reputation in Hollywood which is something hard to come by in Tinsel Town. Costner let Cook read the script and he in turn talked it over with WDS's President Oren Aviv before they quickly said yes.
Posted by Honor Hunter at 7:53 AM