A Mouse In The Garden? 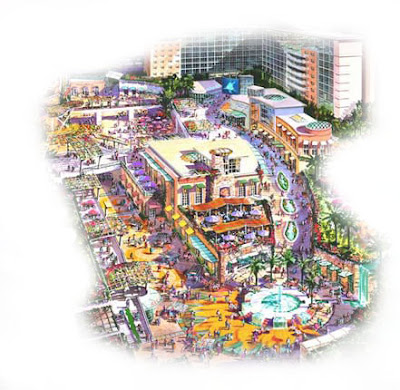 The Los Angeles Times is reporting what Al Lutz over at Miceage did a few days ago about the Walt Disney Company leasing space at the Anaheim GardenWalk for two hotels... one moderate priced family hotel and another luxury hotel catering to the Uber-Rich. Now, I've heard rumblings about Disney negotiating with the GardenWalk folks, but brushed it off until now as sheer speculation... relenting to pressure, I've relayed secret transmission signals to my Bothans to confirm this.

This may be true, I can't say for sure at this time... but I can say it doesn't mean the Mouse isn't going to be building anymore hotels on it's own property. This doesn't affect the plans for that new hotel to go in next to the Paradise Pier Hotel in the next four to five years... or the other possible hotel to go right next to it should the occupancy rates please the Suits at TDA and TDB. This may be the other two of the four hotels I heard the Burbank Suits were planning on constructing. There appears to be much movement around the Resort District over the next decade...

More about this a new Anaheim Blue Sky Alert later in mid-September. Oh, and those that keep e-mailing me about a Hong Kong Update... it's coming. Most likely at the end of September.
Posted by Honor Hunter at 8:26 AM

Why do they have to build off the resort? Don't they have enough parking lots that they can add these hotels?

As someone who knew about this for a few weeks, and is true (but nothing has been signed, it is still a work in progress).

As for why at the Anaheim Garden Walk compared to current Parking lots. Anaheim City code requires a certain amount of parking spaces depending on the use of zoned land.

So they are still building the one next to the PP Hotel? Honor seems pretty sure of this.