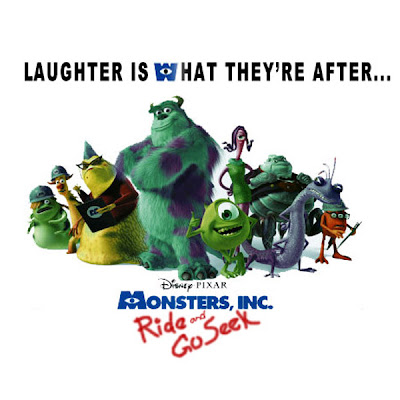 Come this next April, we Disney Fans/Geeks will have yet another reason to drool and be jealous of our Japanese Disney Brethren...


That's the day that WDI's latest amazing attraction, "Monsters, Inc. Ride and Go Seek!" appears inside Tokyo Disneyland. Made with the same attention to detail, it's going to invite comparisons to DCA's "Monsters Inc. Mike and Sulley to the Rescue" ride the way TDL's "Pooh's Hunny Hunt" causes comparisons to DL's "The Many Adventures of Winnie the Pooh" attraction. Originally budgeted at around 90 million dollars, this attraction will have cost over a hundred million by the time it opens next April.

And it's worth every penny...

If you'd like to see some pictures of the outside of the attraction then head over to "Disney and More" for an article with some nice photos they acquired.

So come next April, guess who gets fooled?

There's a reason that Disney's agreement with the Oriental Land Company limits the advertising they can do outside of Japan. Right now, the internet is the one crack in the door that gives us a glimpse of the Disney wonders that await us there and are deprived from us here.

Exposure is the key.

But with each day that door opens a bit wider. Spread the word. Ask questions of Disney management(Read: Suits at Annual Stock Meetings, interviews, ect.). It's more possible than ever to have these quality attractions with the current management.

Do your part, stop complaining and be part of the solution. There is more power in your voice than you realize.

of course Japan is getting another attraction that is soooo much more than what we have here in the states.

True, but our "Monsters Inc." attraction was approved before we got Iger and Lasseter and the former Suits had been flushed down the toilet. You can be sure that if it were being built today, it'd be a lot nicer and more expensive. The new attractions that are coming to Disneyland are very close if not equal to Tokyo Disneyland quality. Now, how the ecomomy affects things, I don't know...

But this is you Fans/Geeks chance to make your voice heard. Be active. Write. Phone. Make yourself heard at the Shareholder's Meetings.

That kind of focus will make Iger and the Suits listen.

"Do your part, stop complaining and be part of the solution."

I agree with you Honor, but dream on if you think all of the Disney board people will listen to you. They LIKE to complain and they don't like to be constructive and make things better.

I also have to say, I think that DCA's Monsters Inc ride is much better than Disneyland's Pooh ride in California.

...Oh and BTW Honor, if we wanted to write letters to get in touch with Iger and Disney at large, what address should we write to?

OLC does TV commercials in Taiwan and even Hong Kong these years...