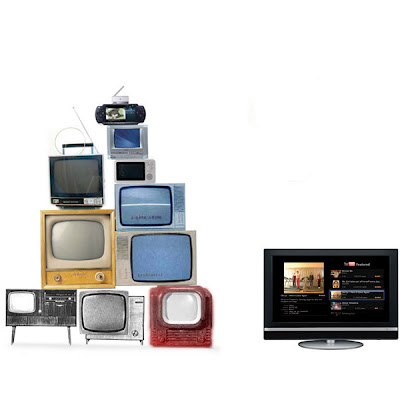 Steve Jobs, Apple CEO and the largest single shareholder in the Walt Disney Company is a man that has undergone quite a change since his youthful days back in that garage with Steve Wozniak. His company has almost mirrored his changes as well, the company that he co-founded, was thrown out of and came back to rescue has had a storied history as colorful as Jobs' own past. I remember hearing him speak in an interview one time, around the time that the first iPod came out. He was talking about the kind of company Apple should be. He said it should be: "The Sony of computer companies." It's become pretty clear over the last couple of years that that has been achieved, but...

It appears now, he actually wants to BE Sony. Or to more directly challenge it as a technology maker and not just a computer maker. Oh sure, the iPod really is the successor the Walkman, but never before now did it seem like Apple was moving into the consumer electronics part of entertainment. I mean, around a year ago they stepped up to the plate and gave us a home run with the iPhone and now it appears that Jobs and his fruit company want to move into another area to control your living room...

Apple may start selling televisions. TV's. There's a rumor going around from several reliable sources that early next year we could see the introduction of a truly "Apple TV"... not just the little box that they sell that lets you download and rent films or music. Although from what we hear it'll have the functions an Apple TV has, plus more.

What it'll look like exactly isn't yet known, but if Apple can do for television sets what it's done for phones, then TV makers are going to be quaking in their boots...

I'll be keeping an eye on this years Macworld event just to see if that announcement is sooner rather than later.

Very interesting...
Posted by Honor Hunter at 12:21 AM

BlueSkyApple? Thanks, but there's Macrumors, Endgaget, Macworld, Appleinsider, 9to5mac and many others for this kind of discussion. Stick to what you do best...Disney!

Sorry Andy, but if you look at the past articles on the site, I always talk about Apple and Jobs because they play a role in the company.

The fact that Jobs is the single biggest shareholder of Disney with six percent of the company belonging to him alone is worthy of note. The company values his input and what he does with Apple has an affect on the Mouse.