Time For A Fearless Leader... 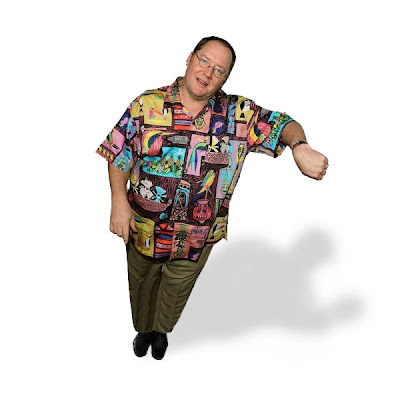 There's a very nice, very long and extensive article over at the Hollywood Reporter about John Lasseter focusing on his decision making as the new leader of all things animated at the Mouse. Go over and give it a look, it's really quite interesting...

Here's a look at the cover of the magazine in which they honored Uncle John/The Mousetro as The Hollywood Reporter's "Innovator of the Year." 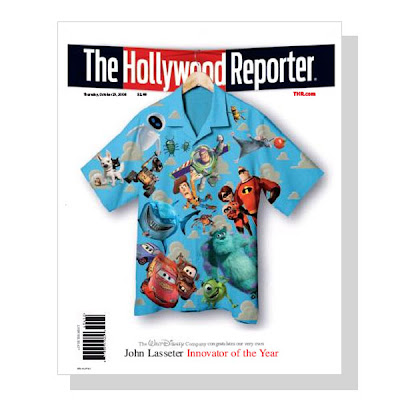 God, just stop with the overly done photoshopping already. The way you edit people makes them look out of place and like complete tools.

I find your photoshopped pictures very amusing. I say keep it up.

If you're thinking he airbrushed out something that Lasseter was leaning against Anonymous, you would be wrong. The original pic shows him looking at his watch. It appears all Honor did was cut out the background and add feet because the photo was cropped off.

I like all the art here at Blue Sky D. It's pretty cool actually.

It's Honor's own style... and it fits. Why you would need to take time out of your day to criticize this is beyond me...


As for the article itself, I have always had a fervent love affair with Lasseter's shirts. Methinks I should look to see if any are on sale next time I go to Disneyland.

I like Honor's pictures. I wish I could figure out Photoshop.

Honor the pictures are always good. And you are correct this website does rule :), thanks for it.

I agree with the first anonymous, Honor Hunter is a tool. Fearless Leader? Your slavish devotion to capitalist icons bent on exploiting you is foolish and ignorant. I'm amazed at the mass stupidity among you Disney fans. In a little more than a week that will all change when we elect a leader that should expose you right-wingers for the cool-aid drinkers that you are.

Too much focus on greed and America and not enough focus on helping others and the plight this country has caused the world. Election day we will begin to wipe away the mistakes of the past eight years. Actually make that since that bobbling old zealot, Reagan.

No one will remember you silly old glorification of Disney once someone as brilliant as President Obama gets in. No more fearless leaders, only a leader.

Ahhh, Che... You certainly have found the wrong blog, haven't you?

Let it all show just how ridiculous some political supporters are. I'm not saying that one side is more kook than the other, since they both have their fair share, but Che here demonstrates just how ridiculous mixing politics with Disney really is. Here we have a great article on Lassie and all you can do is spurn capitalism and the conservative movement?

You realize that good old Bob Iger was a fervent supporter of Hillary during the primaries? I'm pretty sure that support passed onto Obama for the national election, but it just goes to dismantle your point. Disney doesn't necessarily equal Republican values, but it is indeed a very capitalist company. In fact, America has pretty much run on capitalism for quite a while now. To suggest that out and out socialism would make things better is absurd.

But what is truly absurd is injecting a peace-loving blog post about Disney with vehement criticisms and radical politics.

For both sides, let's try to keep politics off this site. Yes, we do have freedom of speech, but there are more appropriate sites to vent our political views. Let's try to put aside our differences and keep the topics Disney related. OK?

Matt you are correct, Che must have wandered onto the wrong blog, poor thing.

Poor Che indeed. He's either a wildly confused leftist or someone who wants to make people think Obama is some kind of socialist revolutionary.

Must admit that I find the "Uncle John" comments a bit much but it is Honor's website so he can do what he wants I guess!

I think Obama thinks he's a socialist revolutionary, so I believe Che is just following his leader, so to speak.

He (Che) does seem to be more giddy and venomous since Obama's gone up in the polls.