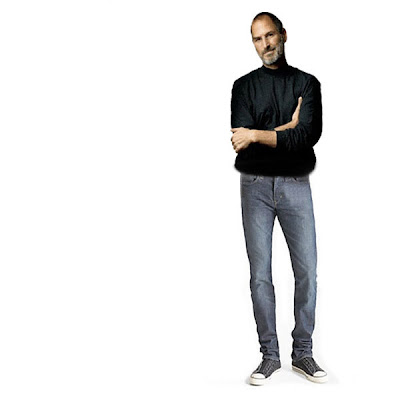 I know that Steve Jobs is one of several members on the Walt Disney Company's Board, that he's one of the most influential with Iger because of his relationship with Pixar and Lasseter, that him owning six percent of the company makes him the largest single owner of all, but...

Maybe he should be, I don't know, more. I mean, remember when the Mouse bought Pixar, everyone heard the rumors that he was going to mount a takeover like he did at Apple back in the late 90's. There were constant rumors going about that he was going to challenge Iger for the CEO slot. There were a few that he was going to take the position of Chairman of the Board and be the power behind the throne. It all turned out to not be so... except that he is "a" power behind the throne, just not the only one. When you're as successful as he is, with his ability to persuade, with the almost Disney-like fairy tale story of Apple's resurgence, you have to have some influence at the meetings they have. With his power over the music industry, his evangelizing of the iPod and changing the cultural typography of society with "must have" products like the iPhone are all magnetic powers that have people on the Board listening to his suggestions. But...

Shouldn't he be more? Like, maybe he SHOULD be Chairman? Or something else. I mean, have you seen the latest quarterly reports that came out today for his fruit company?

Talk about a company that refuses to take part in the recession. Apple, Inc. alone has told the market and the world that: "Thanks, but no thanks" regarding this economic downturn. If only GM and Chrysler had handled their business like Apple then perhaps they wouldn't be talking about a merger right now.

For those of you with a giant question mark over your head saying: "What are you talking about, Honor?"

Well, just take a look at the financial results from earlier today:

- Apple's "Peripherals and Other Hardware" brought in $428M in change... errr, I mean revenue. This was a 24 percent increase year-over-year.

- Apple's "Software, Service and Other Sales" accounted for $549M in revenue. This was a 28 percent increase over the same period in 2007 and a 10 percent over Q3 numbers.

- Apple sold more Macs than they've ever sold in a single quarter of its history.

- Macs actually accounted for less than half of Apple's total revenue with just 45.9 percent of total income.

- Apple sold 6,892,000 iPhones during Q4, earning $806M from these and related products; this is more than all previous quarters combined. They've already passed the 10 million mark that they planned for the entire year and have three more months to go. I'd call that purty successful, wouldn't you?

- Sales of the iPhone actually beat RIM's BlackBerry shipments last quarter; RIM shipped 6.1 million handsets compared to Apple's near 6.9 million. Apple, Inc. is now the third-largest mobile phone supplier in terms of revenue and it only became a phone maker a little more than a year ago.

- and Apple said that they sold more... do I really need to go on?

Actually, I could. There's quite a bit more news pertaining to iPods, Apple Stores and several other things but I think you get the point.

With his attention to detail and his ability to make things that the world craves, could he make Disney's world be even more desirable?

I am sure that Jobs has even more influence than we suspect he does. At least I hope so. What he has done with Apple is incredible.

Steve jobs gets too much credit. He didnt invent the ipod or itunes. He didnt intent for Pixar to become a movie studio. His only credit is putting smart people in good positions to implement their great ideas that makes billions.

Apple products are so overrated. I don't understand the fascination with Apple. Their products are crap and I can't believe people believe all their hype. Jobs said during the press release that his customers are the "smartest, more product-aware customers in the market" when in reality they're the dumbest. Apple products are not worth buying. Ipods, for example, have the worst audio quality of any PMP but people still buy them just because they're flashy eventhough they suck. People are dumb in buying them. I for one would not be supportive of Jobs taking a major role in the Disney company. Everything would be expensive yet built on the cheap. Instead of paying $60 for admission to a park we would have to pay 3x as much for a flashy experience yet we wouldn't get quality products. Honor, why are you trying to brainwash us with this Apple nonsense. Just because you're a fan of Apple products doesn't mean you have to push it on your visitors to your blogs.

I don't brainwash anyone on anything. If you've read the blog over the past year and a half you'll notice there are quite a few stories related to Apple and Jobs and I've explained too many times the relevance of their discussion. As for your dislike of Apple products, we'll have to agree to disagree on that.

Well, I don't own a single Apple product, and I don't suspect I will any time soon. I'm happy with my MP3 player, and I still buy CDs. That's not to say that they don't make a nice product. Trendy is more likely though. However, I can't bring myself to actually like Jobs. He seems so pompous to me. That and he needs some new wardrobe items. Are we really sure that with that wardrobe, the man has one once of creativity in him? I'm not. But I'm willing to be that there are some people around him who do. However, I haven't really seen anything drastically new, or revolutionary come out of Apple in a long time now. If you ask me, that ship has now sailed. Sales will begin decline shortly.

To the anonymous poster (it really bugs me when people refuse to give a name or pseudonym) you entirely missed the point.

If Walt Disney were alive today, we would more than likely find that he was fairly pompous. Most people who lead are pompous by nature. Walt didn't invent animation, though he came close to perfecting the art. Same with the amusement park.

Walt knew how to surround himself with top talent and then make them work to his liking. Steve Jobs, Bill Gates, Donald Trump, Bob Iger, the President of the United States they are all the same and bring in the best. At Apple, Jobs does not let any product even get far into development that he has not approved first. Remember Walt was the same way!

True that Jobs did not invent the ipod, nor the personal computer, but he recognizes trends and smart design and then capitalizes on those markets. Just like Walt. Let's face it, Steve Jobs has a proven track record of hit products for almost 30 years. What's your track record like?

I'd like to see more direct influence. Jobs is a modern Disney. It's a great fit, like Steve's jeans.

To Justin, how does Steve Jobs have a proven track record for 30 years?!?
Apple has done well for 3 years! Apple has been a JUNK stock for over 20 years! When all of Apple's hype goes away, Apple will be where they were in 2005, when it was trading at or below $20 a share. About the same price it was in 1988.