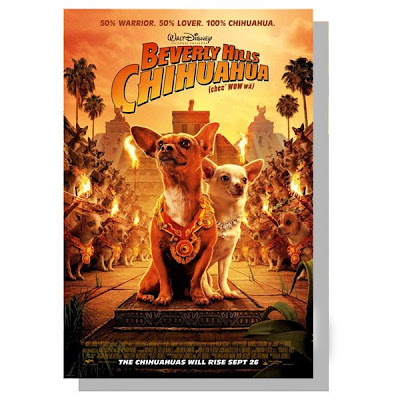 As in Beverly Hills, that is...

What next? Manhattan Poodles: Beveryly Hills Chihuahua 2? Who knows.

One thing is certain. The little dog cleaned up at the box office this weekend, and that's got to be good news for the Mouse. This year the cash registers haven't been nearly as good to Disney. With no mega-blockbuster like Pirates leading the way, WDP has had one disappointment after another.

So I guess it's good news(financially speaking) that Beverly Hills Chihuahua opened at number one. The canine comedy scored 29 million dollars for the best October opening for Walt Disney Pictures...

Congratulations go out to the top dog, Oren Aviv for his visionary development of this project. Apparently he knows what audiences want more than people think. Now, I'm getting a little... ok, more than that, but I'm just tired of everything being about dogs("Bolt","BHC", ect.), so I'm going to make this a No "doggie talk zone" for at least a week.

Interesting. The movie has zero appeal to me, though my oldest daughter definitely wants to see it. Chances are, we'll miss it because her friends will have already seen it, and if they get together to go to a movie, it'll be something else.

Frankly, I could pass it. But I'm always glad to see Disney doing well, even if sometimes the content they are using to succeed is--um--quesionable.

seriously.. a no dogs zone for a week?!? Surely not possible!

I love Chihuahuas wont to see the movie!

#1 at the box office? Wow, didn't see that coming at all. I thought this would be another flop. I think Disney's fail safe when they are in doubt or out of original ideas is to turn to dogs.

A lot of good clean fun! Andy Garcia is terrific. Also, a quite refreshing view of Mexico. Well made pic...did not expect to enjoy the film as much as I did. The Bolt trailer/sneak peak, looks very promising! See ya, Positive Pete!

I saw it with my 5-year-old on Saturday and it was fine. My daughter loved it. They could have changed a few minor things and gotten a "G" rating instead of "PG" but that's just me being picky. It really did turn out to be much better than I expected when I first read about this film. It fits in well with the "second tier" of Disney family films, if that makes any sense.

We had an extensive preview of "Bolt" on our film -- two clips introduced by Travolta and Miley. I'm assuming this preview is attached to all prints of the film.

We also had the obligatory preview for HSM 3, which might have been my daughter's favorite part of the whole thing (I have to think that film is going to open HUGE).