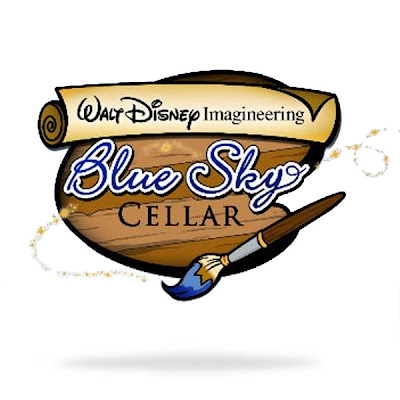 Just a quick update for you here...

I know many of you have seen picks and video of the model that's on display in the Blue Sky Cellar building. Many of you have commented on it, both pro and con, I'm here to clear the air a bit.

The model is the original one that the Imagineers used in their pitch. So not everything you see will show up in the final design... they don't call it "Blue Sky" for nothing now. I've seen many people excited about the "Green Army Men Parachute Drop," but that's not going to happen. This is from the original proposal. The current plan is to keep the Maliboomer until sometime in 2010 when the majority of the pier's construction is done. After that, some of the other plans they have for this helix could be approved, economics pending.

The exterior of the carousel is also not a go yet. If you recall an earlier post, I mentioned that WDI wanted to place an exterior that matched the TSMM attraction since the original look just sticks out so badly compared to the proposed theming of the new pier. The approval hasn't been given yet, but depending on the budget, we may still see this or a variation of it.

As for Mickey's Fun Wheel, well you're going to be seeing what comes of it over the next few months. But when it opens in April don't expect it to look exactly like the model.

That is what the "Princess Palace" will resemble, along with a great deal of more detail around the PP area. Oh, and the games remake should start shortly. By the end of the year, there should be quit a collection of walls down in this area.

I'll try and post some detailed photos later next week. TTFN...
Posted by Honor Hunter at 12:15 AM

so what about the rockwork around the screamin' track?

Heck, being one of the people who has actually seen the Blue Sky Cellar IN PERSON, I can say that there is a note card next to the model of the Pier that CLEARY states that its possible that not every proposed ride may make the final cut.
I can also say that the Maliboomer will be sticking around for a long time. The changeover to the parachute ride (IF it happens at all) will be at the "end", when everything else in the Pier is complete.

BTW, I love proposed new rockwork at the screamin launch. I hope it makes the final cut.

So in other words honor, expect cut-down versions of what we see in the model?

So even now, DCA gets cut-backed versions of things proposed to the public/press.

Didn't we already go through this in the late 90s?

There have been NO CUTS to DCA's budget as of yet...

I've never said they had approved a new roof for KTC, it was proposed. As for the other things, none have been allocated for the budget and have been only in "blue sky" phase.

Don't go thinking the sky has fallen... at least not yet, because it hasn't.

/\ Honor, you might want to put up the definition of the "Blue Sky phase" on your blog. I don't think people are getting the point.

On the model, is that a building to enclose the Screamin' queue? If so, is that a "go"? Anything would be better than the Magic Mountain-style structure that's there now!

"So in other words honor, expect cut-down versions of what we see in the model?"

Did he say that? Did he SAY that??

No, he didn't even imply that.

Why do people always have to twist things?

At any rate, in a few years DCA will be a better park.

There have been NO CUTS to DCA's budget as of yet..."

I think there are some understandable knee-jerk reactions to the thought of something as impressive as what we're seeing in the model phase getting cut back, even if nothing has been formerly approved yet. After seeing the 2001 DCA come out of the great plans that were originally proposed, I think that even the most optimistic fans (which I am one) are waiting for this latest Disney mindset to "prove it" a little when it comes to what is actually in regards to huge projects such as this.

I was a member of WESTCOT 2000 back in the day and have ridden the entire wave of the Disneyland/Anaheim resort from conception to completion. So you can understand why I might get a little shaky at the mention of cutbacks, even if it's not actually mentioned (or even implied...possibly my bad there).

But then, if I have any doubts, all I have to do is look at TSM and how phenomial an attraction and show building that is! :)

Thank you for the continuous reporting. I look forward to this new DCA, and if things like the carosel structure don't get rebuilt the first time around, maybe they'll get it in a future rehab or something.

I just hope they VE that dimensional Mickey head on the Fun Wheel into something 2-D (maybe layered to conceal lighting and provide some depth). Mickey's head is a dopey thing when viewed from the wrong angles. Looking up at the Mouse's protruding schnoz will not be a Kodak moment.

Showing just everything they've got is going to confuse and disappoint people, I'd rather have the grape picking film back.

when the dca resort preview center was out in the esplinade , not everything made it to concept .... people understand its models... just like when a architecht has concept drawings and models it doesnt always turn out to be the same thing people get it... the models look great , the concepts look great this will be a vast improvement honor unfortunately despite what you say it will never be disney sea status that is hard to beat and its mainly the corporate culture that is set up here in the usa

I've never said that DCA would be as good as TDS, because I don't believe that could happen...

I do think it can become one of the best parks stateside, rivaling EPCOT and DAK(which is my pic for WDW's park with the most potential). Now should they eventually go forward with the Third Gate, with management like Lasseter in charge we could see something comparable... possibly.

I will say that a decade from now, the DL Resort will be much better and closer to the dream we all had back in the early 90's.

I can wait a little longer on the rethemed Carousel building or a ride to replace MaliBOOMer (heck, a small park like setting where MaliBOOMer is now would actually be a nice thing inside DCA!). Above all the other things, I really want to see the Screamin' queue and station get a redress. And that new tunnel at the beginning would be nice too.

Is a date set for the refurb of Screamin'? I would imagine with all these changes that the ride will have to have some period of downtime to get all the work completed.

I feel that if everything from the Blue Sky Cellar comes to fruition, DCA 2.0 would be better than MGM, Animal Kingdom, Disney Studios Paris, and The Magic Kingdom.

It would also be better than all the Universal parks and Islands of Adventure.

The parachute ride is a really unique attraction, and considering that Knott's got rid of theirs years ago, nostalgic for those of us in Southern California. It's MUCH better than the generic tower launch ride thing that's there now.

I hope it's eventually built.

Thank you for the update Honor, keep 'em coming :)