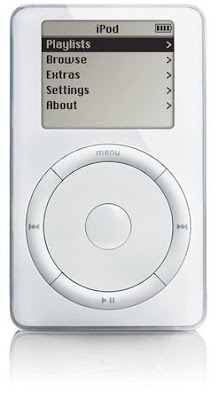 Steve Jobs introduced the iPod to an unsuspecting world and an ambivalent press on this date in 2001. In a small auditorium on Apple's campus, Jobs let the word see what he thought was the next big thing.

They didn't think it was that big and truthfully, neither did he. The iPod along with the iTunes Store has not only changed the face of music, but technology as well. No one could have predicted the cultural shift that this little music device would make. But there were a lot of people that had faith in Steve Jobs. They didn't know where it was going, but they knew that they didn't want to be left behind. One of the earliest supporters of Jobs was Bob Iger. He began cementing the relationship that set up the purchase of Pixar and the ascension of Jobs to a man with heavy influence inside the Mouse in those early days. Just how much influence is debated, but not denied.

Here's wondering what other devices we'll be celebrating in the near future. Not to mention what ideas of his will come to reality at the Walt Disney Company...

That's the most interesting idea of all.
Posted by Honor Hunter at 3:31 AM