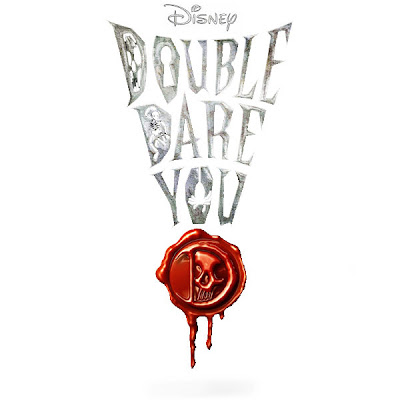 That little tease that Guillermo del Toro mentioned the other day turned out not to be "Deadman" film that he's working on...

But it did turn out to be something he's working on with Disney. The very busy writer/director/producer is starting a production company for making animation under the Mouse's banner. Known as "Disney's Double Dare You!," the shingle will be charged with making del Toro styled scary animated films that have a Disney touch.

Under the guidance of Dick Cook and John Lasseter (woo hoo!), Guillermo will produce several films for DDDY as well as direct ones that he chooses fit his own time schedule. Of course, he won't be directing any of these for a few years since he's got that little project with Peter Jackson up next.

Here's the office press release from the Mouse:

Anaheim, California — September 11, 2009 — The Walt Disney Studios, in collaboration with acclaimed filmmaker Guillermo del Toro (“Pan’s Labyrinth,” “The Hobbit”), is launching a new production label called Disney Double Dare You, to create new animated films full of chills and thrills for audiences of all ages, it was announced today at the D23 Expo by Dick Cook, chairman of The Walt Disney Studios. All films will be produced under the guidance of del Toro, who originated the concept and the design of DDY and who will also direct certain projects. The first project in development for the new label is called “Trollhunters,” an original del Toro story which he will produce.

Commenting on the announcement, Cook said, “Guillermo is a brilliant and visionary filmmaker, and we’re excited to be launching this new label with him. His knowledge and appreciation for Disney films, along with his penchant for creating worlds of fantasy, presented a great opportunity for us to explore a whole new genre of filmmaking for moviegoers of all ages. We have admired Guillermo’s imaginative approach to filmmaking for some time, and now we’re proud to be working with him to create films full of imaginative delights and lots of thrills at the same time.”

Del Toro added, “As a director, I love to take audiences into fantastic new worlds and provide them with some anxious moments in the process. It is part of the Disney canon to create thrilling, unforgettable moments and villains in all their classic films. It is my privilege for DDY to continue in this tradition. To partner up with The Walt Disney Studios, with the support of Dick Cook and John Lasseter, is to belong to a storytelling partnership that I admire deeply. It is a true honor. I look forward to coming up with fresh and original stories that will take Disney films in a whole new direction. The emphasis is on fun, and we have some great ideas already on the storyboards.”

Del Toro’s Pan’s Labyrinth received six Academy Award® nominations in 2007, including one for his original screenplay, and went on to win three awards. That film also received a BAFTA Award for Best Film not in the English language. His other directing credits include “Hellboy,” “Hellboy II: The Golden Army,” “The Devil’s Backbone,” “Cronos,” and “Mimic,” among others. Del Toro is currently directing back-to-back feature film adaptations of the Tolkien classic, “The Hobbit,” for release in 2011 and 2012.

The first project being development for the company is an original story by del Toro entitled: “Trollhunters,” del Toro will produce this as well as oversee the script. More projects are soon to follow.

What form of animation will these films use? drawn? CG? stop-motion? It sounds like an exciting project. It makes me think of another project - Dark Kingdom/Shadowlands park?

This is strange and unexpected. Interesting nether-the-less. So is this an animation studio or a writing\producing studio sending the animation out to other studios to animate?

I wonder if this deal has come about from the popularity of TNBC and what seems to be an increasing number of sort of gothic and creepy style animation.

First-time poster, Long-time enjoyer of the blog: Timing seems interesting when you factor in the Superhero's joining the mousehouse. Could this be an animation location for some of the darker characters?

Hi Honor. Since we are on the topic of animated flicks, could you give us any information about the "Snow Queen" pic thats floating in the Disney-developmental ocean?

and that is why this site will always be second behind other sites in news and rumors.

Come on Honor, we've asked you before... why can't it be Blue Sky that breaks news and not other crap sites like micechat that like to shove it in your face every chance they get?