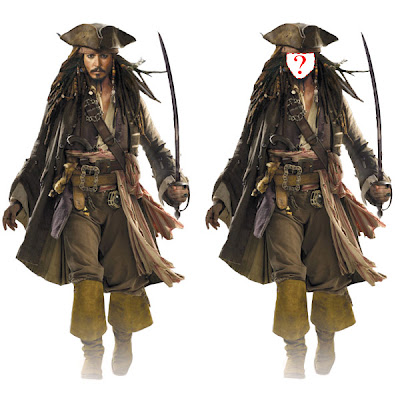 I'm waiting to hear back from several Bothans on this, but I'll offer my opinions based on what we've heard. For those that don't know what I'm talking about, Walt Disney Pictures is rumored to be offering Depp a lot of money for the franchise. Should they only get him for POTC 4, then they're angling on continuing the franchise with another actor; someone that can take the mantle from Cap'n Jack. Again, remember that this is a rumor as of now. Many times rumors fly all throughout Hollywood that turn out to be nothing more than speculation, hopes and fears.

Now with that said, should this turn out to be true I expect whoever is attempting this to be fired. Not that they will be... but they should be. It's an idiotic thought to even attempt to do this. The attraction may have been around for four decades, but when it comes to the film franchise, Depp IS the franchise. To think that some Suit has had an epiphany to believe they can continue on without Jack Sparrow is beyond ridiculous. It's about as insane as George Lucas talking about having Shia LaBeouf taking over the Indiana Jones franchise. Johnny Depp is the soul of that series and to replace him would be like a theatrical version of when the morons that made "The Dukes of Hazzard" decided to replace the stars with two new people that happened to look and act exactly like the original stars. Even if the studio tried hard to create original characters to replace Depp it's a mistake they're going to pay dearly for. Not to mention that whoever came up with this idea to offer Johnny Depp a great deal of money doesn't understand Johnny Depp. He doesn't need the money. He doesn't want the money. He has more money than he could/would ever use or need. He does the character of Sparrow because he loves the character and he agreed to a fourth film because he trusted Cook. Now that Cook is gone so is that trust. I sincerely hope that Iger factored that in when he made this decision. I pray that he has a plan to fix this and I hope that this rumor is not that plan. Because it's a plan that's doomed to failure. It's clear that there are more Suits than Jay Rasulo that I now want fired.

I've heard some people think that they can take another younger star, like someone that is becoming what Orlando Bloom has become and making him the star of the fifth and six parts of the series. If that were the case, when that fifth film comes out I'd expect Walt Disney Pictures to suffer the worse loss in the history of the film division. That film will be a bomb. No matter if it cost one hundred million or more, it will be a disaster. And if Bob Iger fired Dick Cook after the Mouse losing money the last fiscal quarter, whoever takes over now better suffer the same fate. I can only hope that Iger is smart enough to be working the phones over the last week to smooth over ruffled feathers with Depp and others. And the person he chooses to replace Cook now takes on added significance.

Because the betting on when this person gets fired has already started...
Posted by Honor Hunter at 3:33 PM

It's sad that Cook left, but that happens, Johnny Depp should know that. I just hope that he, Geoffrey RUsh, and Gore Verbinski all return. I'd love to see a new Pirates. Make the movie because you want to, not because of studios executives, do it for all those pirates fans out there.

Like any other actor, he'll do it for the same reason they all do.

Selfish reasons. He'll do it for himself if he does it, not fans. And there's nothing wrong with that.

I just hope the script is amazing and makes him want to return.

Even if it's for selfish reasons.

Were the scripts to any of the previous Pirates movies amazing?

No matter how much I love the Pirates franchise, withou Johnny Depp, I wouldn't see another one.

You're prejudiced against pirates not named Johnny Depp. For shame!

Nah, I loved the attraction for a long time before the first movie was even written. I just can't see them not only replacing the guy who brought to life the iconic character of the movie, but one of the most iconic characters of decade.

Iger is on some strong stuff if he thinks replacing Johnny Depp would make any Pirates sequels worth watching for the tons of fans who saw the first three films.

He may as well save the $300 million for production and use it on a brand new franchise or give it to Pixar to work with, instead of throwing it all away on Pirates 5 with Brad Pitt! or something.

It is probably too late now to replace Depp. They could have done it after the first one, since the movie wasn't actually about him. Not so much after that, and I have to admit that for as much *bleep* as the latter two films were and despite how much I dno't like the vandalism on the ride, Jack Sparrow is easily one of the canonical characters like Davy Crockett, Mary Poppins and Captain Nemo.

It's already reported that Gore Verbinski is out and Rob Marshall ("Chicago", "Memoirs of a Geisha") is in as director.

Everyone wrote off a Pirates film WITH Johnny Depp. Then it came out.


Hope it all gets resolved well eitherway really. Could do with any good film to wipe away the disappointment of the last one-one and a half films.

This series is already played out.

They are doing exactly what I would do in their place. If there were serious problems between Iger and Cook then Iger couldn't keep Cook around just to make Johnny Depp happy. They also recognize that Depp is the face of the franchise and are offering a lot of money to try and keep him around. If he does leave after the next movie Disney has to try to keep the series alive using different actors and characters. It just makes too much money not to try.

This IS sad news because Cook loves Disney (I will surmise his love remains for Walt Disney, the concept of Disney versus the corporation). On the other hand, I wish to keep it in perspective: this is a tough recession. Obviously, not even a top studio executive is immune. As sad as we feel for Cook's termination, I ask us to also remember the local teachers (as an example) terminated from schools, because of this economy. Thank you.

Realistically, Cook was losinga lot of money. He did love Disney, but this is the same guy that greenlit G-Force, the well-intentioned,but horribly executed WItch Mountain, and the mutilation of Surrogates, none of which met expectations financially. I for one do not feel Captain Jack should be the sole pirate in that world. By the end of teh third film I was pretty sick of him.

Pirates is a huge world with the potential to tell a lot of great stories. prior to the Black Pear we didn't even know Jack Sparrow. Davy Jones, Barbossa and other characters have been equally as interesting if not more. I'd be all in if talented writers could create more iconic characters and take us on amazing rides. It's like DC saying we already have Superman, why do we need another superhero. this Batman guy will never work out. Sure Shia wasn't the one to take up the mantle for Indy, but several great actors have played James Bond, and Star Trek moved beyond Kirk to Picard. I hope this franchise continues to pump in new blood an dtell new stories over the years even if they aren't guaranteed moneymakers.

Why did Cook leave, why did Ouimet leave, why have so many talented people left. Your CEO sucks that's why. I know all of you have your heads up his ass, but really. Ouimet should never have been moved out of WDW. Cook should have never been shoved out the door. Cook's assests as a whole are worth more than one year of losses-other choices could have been made. Instead he was shown the door. I also disliked a number of Cook's decisions, but a great CEO knows how to remold these complexities.
Now Iger wants to start charging children to read with it's digital line???
Who will be tossed next or worse willingly walk-- Burton, Lucas and Co., more advertisers and financial backers. News flash China is not coming back to save your 2 decades worth of overinflated currency markers.

I'll tell you this--Depp is considered a god in Middle Class America. Why? Because he doesn't treat his fans like a piece of toilet paper. Throwing Cook to the wolves will prove to be a nail in Iger's coffin.

Ah, but folks forget that the same Company that put out 2 pathetic sequels under the POTC brand, seriously damaging the brand and alienating a lot of fans, is behind this brainstorm.

Yes, lots of folks "loved" the movies and spent lots of money on them. Sorry folks, but a lot more didn't and the left overs in the bins (DVDs and toys) says a lot.

If Depp is as smart as I think he is, he won't sell out and Disney will be up that same creek looking for not only a new paddle, but a new boat.

After all, he's already said he will be very particular about the script (which rumor has it he wasn't so thrilled about for the last two (cough) epics).

Sounds like the Big Boys are in trouble and they know it.

I know not everyone liked the movies, but saying a lot of people didn't like them is just downright false. It wasn't until Pirates 2 came out that Pirates became the huge franchise it is. Sure Pirates 1 made a hefty amount of money and was popular, but no where near the hieght of Pirates 2 and 3.

And The Curse of the Black Pearl is still the best, so ha!

They already have an actor capable of continuing the series WITHOUT Mr. Depp.

There are decent stories to be told around Barbossa and crew - and that ship he happens to have sailed away in.

Anyone else brought on board would play second fiddle to Barbossa - unless they can chew up scenery in the same way he or Depp can. And there are planty who can.

More importantly - how about a good story. A good script. And a good director?

Throwing more money and more EVERYTHING at the problem certainly didn't make POTC 3 a solid film.

Good Story. Good Director. Geoffrey Rush as Barbossa - and everything else can fall into place.

Leave Iger alone and be grateful that he's far better than Eisner, who we would've still been stuck with.