Warner's "Lobo" No Longer In Limbo... 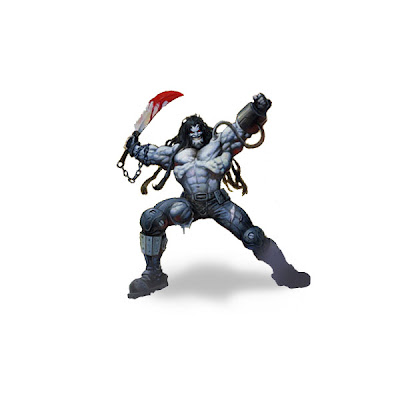 Warner Bros. is proceeding ahead with more comic book adaptions in the midst of Disney's acquisition of Marvel...

Guy Ritchie has been put in charge of the live-action interpretation of DC Comic's cult classic character "Lobo." This is a spot-on pic for the director's chair of this project. Ritchie is the perfect kind of director to bring this adaption to fruition. For those that don't know, Lobo is sort of an intergalactic bounty hunter than comes off like an alien Hell's Angel. If fact, he rides a version of a space bike. I remember first seeing him when I was a young boy reading "Omega Men," when my days were long and the world was filled with promise. The character has evolved quite a bit since then, but he's a wild property that should make an interesting impression on audiences not familiar with his persona.

And for those that are worried about a PG-13 rating, I think the majority of things you see in an action film today with that rating could have easily received an R rating back in the 80's. So I don't think you're going to have to suffer a softened version of rude, crude dude.

The only thing that bothers me in the press release is the description of Lobo as blue. The people who write those things can't even open a comic book to see what color he is?

Exactly, I am indeed worried about the rating. I am not going to watch a PG-13 film that should be rated R.

I hope this will start a good (friendly but fierce) battle between Disney\Marvel v Warner\DC.

But keep the quality up and the quantity at the right level.