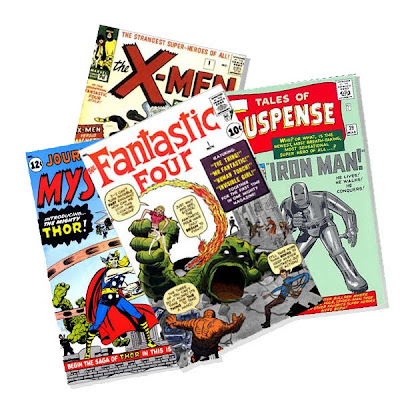 Just weeks after it was revealed that the heirs of Superman would gain control of the iconic figure in 2013, the heirs of Jack Kirby, co-creator of Captain America, Fantastic Four and others, have filed suit against Disney, Marvel and a collection of others for ownership of those and other properties.

I remember when hearing about the "Disney buying Marvel" deal and wondering if Iger had asked the Mouse's lawyers about this. I can't imagine it didn't come up and I wouldn't believe that they would approve an acquisition that wasn't water tight. If anything comes of this lawsuit I'd expect several legal experts to get their walking papers. And Bob Iger would be on very shaky ground with shareholders and the Board after paying four billion dollars for something they now would have to fork over more money just to keep.

Good. It's about time the people owned these properties and the capitalist gluts that stole them decades ago will get their just rewards.

Although, personally I think that since the artist and writers are long dead, the profits from these beings should be public and given to charity. These heirs don't deserve such large amounts of income. The publishers raped huge amounts of money from their own theft years ago, so now it looks like the families will as well.

All of those characters should, just like Mickey Mouse, owned by the public and not held hostage by a corporatist elite.

If I recall, normally that is the case... I think Disney had to go to court to actually have a special case made because Mickey was the 1st time an old character was still relevant by the time it would have become public domain.

If a character is still relevant, I see no reason why a company should not still have the sole rights to it.

This is quite opportunist isn't it?

There is the case that numerous of creators can hold legitimate claim of ownership of characters, due in part to the fact that there is not one creator of any of these characters. Subsequently there are a number of creators who have contributed to the properties by offering new elements to their legacy - which is what has lead to their success over those original, very bare character archetypes.

This could be interesting.

And no these characters should not be public domain. That will only lead to anarchy. The properties are too popular in the current climate.

Like to know what the partner studios who own film\tv\theme park rights think of that.

Oh joy, Che Wha? is back. I can hardly contain my disdain.

"Oh joy, Che Wha? is back. I can hardly contain my disdain."

It seems purposefully trolling the comments section of Blue Sky Disney has become a bit of a crowded sport as of late. Sadly I don't think the situation can possibly be remedied given how crazy, rude, or uninformed some of the legitimate comments are in the online Disney fan community.

Screw the mouse. They think they can buy everything. Marvel was built by the talent of artists and writers like Jack "KING" Kirby. His heirs should have full control of his legacy, not some board of greedy business suits. I will laugh my ass off if they win a lawsuit and regain the rights to these beloved properties. Marvel rules, Disney are fools.

He doesn't realise that if the heirs of Jack Kirby were to "win" supposed "control of his legacy" then Marvel would too lose the rights over the characters. So your "Marvel Rules" is a bit misplaced.

I'm pretty sure the Kirby estate would license the characters back to Marvel as long as they retained ownership of the characters.

Jack Kirby should be given deserved credit at the beginning of comics, films, television shows etc...
But the characters do belong to Marvel. People should remember that the creators were paid to create and write and draw characters, it was their contract.
Marvel has promoted the characters for decades, which is what has made them so iconic and successful, if not for Marvel the company, the characters would be long forgotten.
I don't think the heirs of the King should benefit from the work of other writers and artists who have added to the frachises.
Give them a fair payoff, and give the King credit. End Story.

The estate have no idea how to manage properties as best they can so it would be a bad idea for them to think they can take control and license them out.

Unfortunately Kirby did reliquish (sp?) rights to the characters in his latter years.

^Thanks for your opinion, travel web site spam-bot.