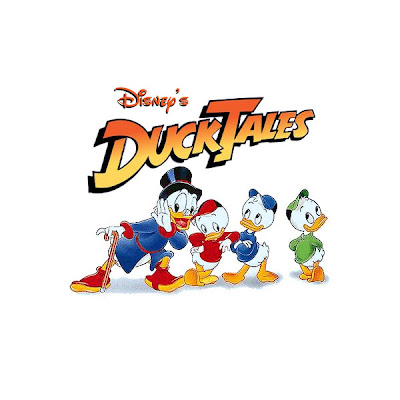 Disney's "Ducktales" premiered today in syndication across the country and became an instant hit. This lead to the creation of a block of two hours of animation that became known as the "Disney Afternoon."

But the cornerstone of it were the adventures of Scrooge McDuck and lovable nephews that were inspired by the comics drawn by Barks over a quarter of a century before. I remember watching these episodes with giddy, geeked out abandonment as I never thought I'd get to see those comics I read as a small child actually turned into an animated series.

If you happen to have them on DVD like me, pop in a disc and reminisce a bit...
Posted by Honor Hunter at 4:37 PM

This was one of my most favorite shows when growing up, can't believe it's already 20 years ago!

I have some episodes on DVD, as here in Europe they didn't launch the full season DVD sets, so maybe I'll watch one later...

Life is like a hurricane here in Duckburg! :D

While doing door to door work several years ago, I happened to meet Mr. Barks. While I didn't immediately recognize him, during our conversation, he indicated he had worked for Disney, which led to a further discussion. While we spoke for only a few minutes, he seemed to be a very gracious and humble man who was happy to meet someone who knew his work.

An amzing show with some amazing characters. Seeing Scrooge Mcduck a the theme parks last christmas was like a dream come true.

Oh, those fond childhood memories... Disney Afternoons and Triple Feature Fridays, those were the days.

I definitely liked Duck Tales, but my favorite was always Gummi Bears, for some reason that doesn't seem to retained the same level of recognition as most of it's peers.