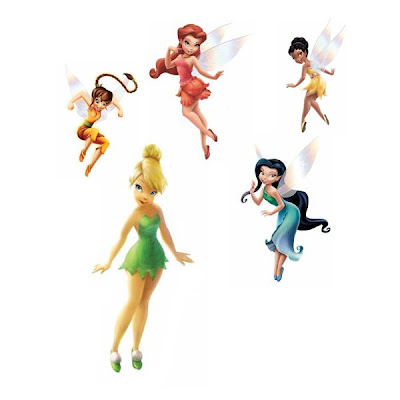 And you thought it was just a fad...

We've seen the schedule released last year showing the timeline for the "Tinker Bell" series of the Disney Fairies franchise. It originally started out as a quartet of films; each reflecting on a different season (Spring, Summer, Fall and Winter).

Tinker Bell and the Lost Treasure.

And with the success of the first film and the rough layout of the continuing stories, the Mouse has announced that there will be another film after that one entitled: "Tinker Bell: Race Through The Seasons."

That will take us past 2012. But what they haven't announced is that there are plans for more Disney Fairy films after the fifth Tinker Bell film. In fact, there will probably be a couple more at least, taking us close to the middle of the next decade. That puts this series on the road to a decade worth of properties so you have to know the company is very serious about these films.

They're deep into story on the series thanks to the attention that John Lasseter has give it. Now, I know this series isn't for everyone. It's definitely not for me. But there is a huge following of Tink out there and they love her and I prefer this as part of the Disneyverse than seeing a Hannah Montana t-shirt or a High School Musical lunchbox. And one other thing is that these films actually have plots and characters. And they're pretty good... just not my taste. Lasseter has cared enough to be involved in the creation of story from beginning to end. With the exception of the first film, he's been involved with the plot far more than any film by a Creative in the studio. When Eisner was there, he let the Suits over at Disney Consumer Products just pump out crappy sequel after sequel. Hence the deserved title that came to be known as "Cheapquel" to all this dreak.

Luckily the person that DCP had handling Disney Toon Studios was relieved of her position and all future titles were put under Catmull and Lasseter's supervision. And it's worked out so far. The artist and everyone in management over there has been decidedly upbeat with the infusion of trust that the Mousetro has given to them. Just like the WDAS brand, he expects more of them and they've been delivering when respected and given the ability to show their talent. Plot and story points actually get thought out, not thrown in on these films. Take for example the third film, which will be out next year, it's being animated right now over in India, but the story lines are still being reworked, extended or tweaked. When a new plot device is discovered to advance the story, it goes in. If a new suggestion will help out with making it better, it'll get serious attention. There is actually real care being taken to handling these properties because they want the product to be worthy of the Disney name. The stories for the fourth one are getting more and more in depth with it also being refined as the production dates move closer. The fifth film, which Lasseter admitted will be released around the same time as the Olympics will have a topical narrative to tie into that atmosphere, but as of right now they're in early story development. As for a sixth and seventh or even an eighth outing of fairies? Story plots are being pitched and thrown around at a leisurely pace. But it's been made known that such ideas are welcomed. Good ones will move further down the creative assembly line.

There are good things happening in the home distribution division of the Mouse and I have a feeling that a year or two from now, animation at the theatrical and home areas of Disney will be thought of in a much better light by the people that purchase tickets and DVD's. Quality has a way of doing that. I have a hunch that those fairies will have a hold on girls for a long time to come. Now when it comes to boys? I have a feeling we're going to see Disney get a grasp on them soon enough. After all, you didn't think Tink was the only series they've been developing, did you?

It is a fad, a manufactured one.

Yeah, kind of like Toy Story 2. Wait a minute, I liked that one better than the first!

Maybe if it's good I won't care if it was manufactured. As for you Spokker, I don't think you'll even give it a chance. But then, you're not a young girl.

Oh, Lasseter's true reason for making this a franchise is so the femmslash writers would have a western fandom to actually write in!

Oh well, I was surprised by the first movie, it was actually good, coming from DTStudios...

As long as they NEVER EVER make a part 2 or 3 or 14 of an animated classic it's ok with me, these Tinker Bell movies are not so bad I guess :)

We couldn't have said it better ourselves. Nice job, Honor.

yEAH YEAH YEAH. WHAT A LOAD OF NUTS

Also, the crew is so talented! See these:

I've said it before and I will say it again. If Disney makes $1 billion off of the Fairies franchise and has LOTS of money in the bank, then they will be MUCH more willing to spend money on other projects (like theme parks). You can't spend it if you don't have it.
This may not be your thing and that's OK. I happen to enjoy them, but I have a 4 year old daughter. I am glad that they are focusing on making them better. That's a good business strategy because us parents have to endure these movies over and over and over again and we would endure them better (and buy them more often) if they were good. I know I refuse to buy crummy movies no matter how much my kids complain.

Personally, I thought they rushed the Tink storyline on Disney Channel. The opening had a mysteriousness to it that I would have liked to have seen taken a deeper route. Before her hair was tied in a bun and one of the other fairies was "jealous" of her and the forest had a feeling of the beginings of time. This has the potenetial of something better than just a billion dollar franchise.

What is this new series for boys you teased us about Honor?

It's gonna be something that's far better than that.

Now, pull up the sail and set a course for... ooops.

Well, Disney does have a boy fairy in the works -- read somewhere about open auditions for a live parks character. Let the bad jokes begin.

Nothing to do with Fairies...

Four words: Peter and the Starcatchers

Awesome project, Mel! Wow! I love your idea with new use of digi-images! Thank you for sharing tutorial, templates and your wonderful inspiration! more templates easy to download