The Wonderful Wizarding World Of Competition... 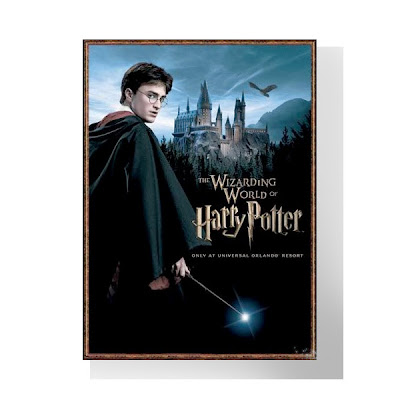 Universal Studios has came out with some interesting artwork and video for their Harry Potter theme park within a theme park...

If you'd like to see what Universal Orlando has up their sleeve, then check out the video here that highlights what Universal Creative (Universal's equivalent to Imagineers) has designed. The primary attraction, "Harry Potter and the Forbidden Journey" will be interesting to experience when the attraction opens in spring 2010. Although there's not a lot of information about that ride on the site yet. Go over to the official website and look at a lot of the concept art. Also, Brooks Barnes has a nice article over at the New York Times about the announcement.

Some people worry that this will steal guest away from WDW, while some think it'll have no affect on Disney whatsoever. I tend to play it in the middle. Islands of Adventure is a great, fun theme park with many detailed areas, but it didn't do the damage that Eisner and Co. worried it would do to the Florida resort, because if it had there would've been a couple nice additions to the park to compensate. Never panned out. I hope it does gangbusters, because competition is good. If they do something that draws more people into their park, the Mouse will have to counter and that's good for everyone. After all, why do you think that Fantasyland expansion got the go-ahead? Universal was one reason, Lasseter and others pushing the expansion was the other. But that's what happens when challenges are put upon you... you strive to do better and the results of that benefit us all. Difficult times lie ahead.

So let's have at those obstacles...
Posted by Honor Hunter at 7:33 PM

I think it is a little disappointing that there is really only one brand new ride.

why would anyone (that doesn't work for Disney) be "worried that WWoHP will steal guests away from WDW"?

"I think it is a little disappointing that there is really only one brand new ride."

Agreed... but at least it's going to be an excellent ride! And it sounds like the queue will almost be an attraction in itself.

"why would anyone (that doesn't work for Disney) be "worried that WWoHP will steal guests away from WDW"?"

In my experience, I've met a good number of very passionate Disney fans who think that the company is so awesome that it should just never have any competition. At any point of competition, be it theme parks or animation or whatever, anything that is not Disney automatically sucks. I can see those people being "worried" about Harry Potter because, morally, everyone should be going to WDW.

Not sure if I agree. Disney has done a number of things to squeeze out Universal due to the competition. Disney immediately created the Studios Park. Later, it created Space in EPCOT and Dinosaur in Animal Kingdom to meet the threats. Most recently, it has the free direct transportation so out-of-state visitors can completely bypass Universal as well as other local attractions.

The New Fantasyland is a great example of competition for Harry Potter. The changes are spectacular and it has much more to offer than Harry Potter, which is short on rides.

Disney is meeting the challenges and I think Universal is hurting Disney. Now with Marvel, Disney can squeeze Universal some more.

I must have missed where the new Fantasyland is long on new rides.

All it really has is a clone of the DCA Mermaid ride.

At least the main Potter ride is original.

I don't even think the new ride is really a "ride" per se. It's only described as an attraction. I thought they were going to make Hogwarts into a giant "MagiQuest" type of thing.

"Some people worry that this will still guest away from WDW"

Excellent thinking of making of such a big park. Great. london Escorts

Annoyed at the rethemed rides (hoping that the theming will be worth it)
Suprised there isn't a Hogwarts express ride or walk through type thing
Interested in the extent of the theming around the area and how the shops and placemaking work
Excited for the brand new ride, and a pretty decent name for it too
Irked a little that there is only the one new ride, the franchise could work in many more ways
Fustrated if it doesn't open in time for my next visit
Irritated by the 'Disney-Universal' fan war, and the Disney fanboys who refuse to be excited about this as it's not Disney

I think Universal unintentionally made this project feel small in its roll out yesterday. You don't make something feel big by focusing on the details...you do it by making a sweeping gesture.

If the concern was that HP would be forgotten amid the sweaty armpits pouring from the Disney announcements, they should have led with the RIDE and made the rest of the area come in as support. A half dozen superlatives about this KUKA based attraction could have swamped Mermaid and the limp wristed Star Tours sequel

BTW - Richa: interesting link. But I live in Ohio.

Glad to see they aren't skimping on the retail adventures!

re: london escorts. I use them everyday. brilliant service. bunch a sluts they are.

with all the recent censored posts why is a link to a site featuring topless women allowed to stay up when children might be coming onto this Disney, family friendly, PC blog???

double standards? that is all.

Three rides and a huge area allowing you to visit the Wizarding World isn't a bad start.. They want to open it before the film series is finished. They will add more through the years. Hogwarts wasn't built in a day.

"Irritated by the 'Disney-Universal' fan war, and the Disney fanboys who refuse to be excited about this as it's not Disney"

Well, isn't one's excitement sort of dependent on whether or not they're a Harry Potter fan? Me, I'm still more interested in the Jurassic Park island ^_^

^^^ agreed on that. Sorry I probably worded that wrong. Its the generic universal hate that comes from the more fanatic disney fans. The ones who dismiss anything not disney.

You hear a lot about whether this is going to hurt Disney and that is bad for their fans on some boards. I think thats silly. You shouldn;t worry about that. You should be happy to see that both resorts are having mini expansions and will both be better for it (to various degrees).

Taste and opinion is a different matter. Didn't mean to suggest that.

WWOHP will have three attractions, (rides), initially. Forbidden Journey is a attraction, walk thru & more. Don't discount what has not been revealed!

I hope I can take my escort to the opening of Harry Potter Land.

"I love Disney, but Universal is my favorite non Disney park"

TDS is my favorite non-Disney park, but Universal Studios Florida is indeed a close-second.

No problem ^_^ I was talking about the same sorts of fans in my first post here. On one mesage board once, I actually had a quasi-argument with someone about how it would be bad if Disney owned all media because, y'know, it'd be nice to have some variety. Goodness, how could I say that?!? And I call myself a Disney fan?!?

Whether Universal is shaking in its boots, I do find the Fantasyland extention's reliance on castmember-guided attractions (princess storytelling and meet'n'greets) over simple rides sort of interesting. It's a provocative departure from the cry to throw thrill rides in everywhere.

Well, Meet & Greets are the "reality shows" of the theme park business. They are cheap, low maintenance options as opposed to the high cost attractions (TP version of "scripted series"). So, Disney can make an entire land based on those meet-and-greets on a nice little budget. Unfortunately, the overall effect will do little to reinforce the impression of the Magic Kingdom as a family park.

HARRY POTTER LAND IS GOING TO HAVE BOOBIES!!!!

Sorry, Anoymous, but you're wrong and you know it! Take back the hateful, disgusting things that you just said this instant!

Unfortunately, the overall effect will do little to reinforce the impression of the Magic Kingdom as a family park.

2.0, you know that you're wrong as well. Quit the doom-and-gloom predictions, for goodness sake!

As for you Spokker, TDS IS a Disney park and you know that! Don't be so stupid!

"As for you Spokker, TDS IS a Disney park and you know that!"

Oh, I didn't notice. They have such higher standards over there.