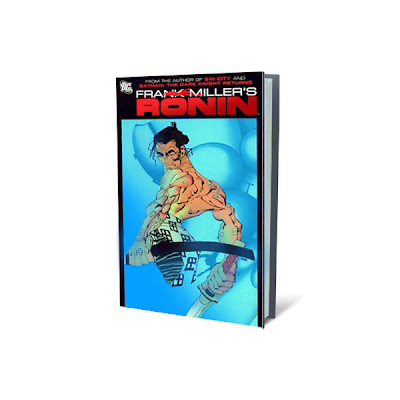 Some interesting news regarding my adolescence...

Well, only tangentially regarding it. Frank Miller's "Ronin" is a graphic novel I remember buying as a young kid, not knowing what to expect. I fell in love with it. Truly an amazing milestone in the history of comics that has only gotten better as the pages of time have moved on past it. There have been attempts to bring this to the screen before, but like most of Miller's work, it languished in development hell until most recently with his works like "Sin City" and "300" making Hollywood take note. Of course, Frank shot his own ego down a few notches when he decided to direct someones work that wasn't his own... and one that had a comedic tone no less.

"The Spirit" will not go down as his finest moment, but after his epic work on "The Dark Knight Returns," his work on "Ronin" stands out as his best work. All this came during his a high point in his career, off of his run on "Daredevil." He was a comics superstar and the comic book's own Steven Spielberg. After leaving Marvel he wanted to write something of his own, not another super-hero running around in his underwear and DC Comics gave him the creative freedom and the outlet to do so. The result was "Ronin," a combination of "Highlander" and "Yojimbo" set in the world of "Blade Runner." At least that's what I would pitch it as. It's a little more layered than that, but that high concept phrase gives you an idea of what to expect.

Now, the latest director attached to the project is hoping to get it off the ground in a big way. Sylvain White is the man slated to bring Miller's post apocalyptic samurai film to the big screen and Collider talked to him about the project. He just got the latest draft of the script and he's hoping to make it his next film after "The Losers." It's clear from the article that he's got a passion for the graphic novel, hopefully he'll be able to take that world and bring it to film.

But another wrinkle in the story is how Diane Nelson feels about the project and will DC Entertainment have any involvement in this? Many of the comic book properties have recently been brought back in house from the development slates they've been at. Will she want to bring this one is as well, or does she trust where White wants to take it. I think we're going to hear about this and many other projects over the next few months as Nelson creates a more streamlined production schedule. I think by next summer you're going to have a good idea of the path DCE is headed and which films will be seeing the light of day over the next three or four years.

I'm just wondering if Ronin will be one of them...

I love Ronin. I hope they're able to capture the amazing visuals. This will be like a futuristic Kung-Fu movie. Greenlight this now!

Didn't they already make an adaptation of this with Robert Deniro a few years ago? Why do it again?