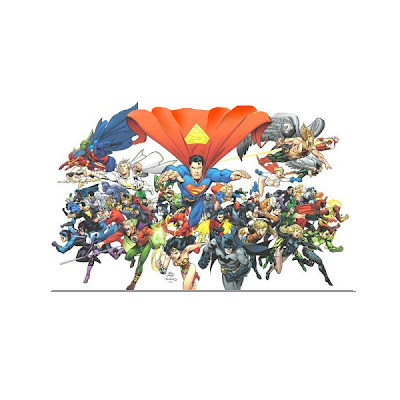 Funny how success can change things...

I mean, when comics first came out, film makers tried to cash in on them with serials and then television shows and finally films. But Hollywood Suits always thought of them as jokes. Just a way to appeal to a bunch of geeks that they didn't understand. It wasn't art, it was business. They made the product because they figured they could make a buck or two.

Serials never got a budget worth of their stories, television got a little more respect with the "Superman" series in the 50's, but not much. It wasn't until 1978, with "Superman: The Movie" that Hollywood took more than a passing glance. Don't even begin to think about all those horrible Marvel TV series. The Hulk turned out to be the most solid, but quite off the mark of the property it was supposedly portraying. Finally, a decade later, "Batman" came out in 1989 and the studios started to finally get an idea of what they might have on their hands. But still, it went in jumps and sputters. From the flash of "The Flash" to the beginning of the Marvel Age of films that started with "Blade." And that's when they finally started taking comics serious... I mean, about the making money really. They were marketable, but they still weren't art. Or so they thought.

Until 2008. Until "The Dark Knight" knocked them off their high pedestal and they suddenly realized comics could be both art and commercial. And thus, the floodgates were let loose. That was the beginning of Disney's desire to join the club. And with DC already taken by Warner Bros. that only left the other big guy, Marvel. They could have bought individual properties from independent companies, but Iger wanted the crown jewel. Having it put the company on a level playing field with Warner... almost. Those legal wranglings will take a decade to sort out, but here we are.

It's a game of chess and DC made a major move last year with TDK, followed by the stunner move made by Disney last week buying Marvel. Warner was in the process of focusing more attention on the DC properties, but this town is filled with egos and Warner wasn't about to be shown up. This may have just all come together or it may have been planned for months, but the Mouse's announcement caused the gears of this deal to go into motion much quicker. And this press release shows how much Warner now values these properties. It also shows me that there is going to be some resolution to this Superman rights fiasco. There's just too much money to be made to not come to an agreement between all parties.

Now as for some of the pieces of this deal, I like what I see. Based solely on a quick analysis, of course. First off, I think getting Diane Nelson to head the division is a great move. She's done a fantastic job of guiding the "Harry Potter" series and if she handles the DC properties with as much care, comic fans are in for a treat. The first property she has to get hold of and put into an advanced state of play is Superman. The clock is ticking on that crown jewel and she needs to move now. If she has the power to move and make decisions with only Robinov to veto her, it's a good thing.

Paul Levitz moving to become a consultant for DC Entertainment is a good move with his many decades of experience with the characters. His leaving is something many have expected for a while as he's expressed interest in going back to the creative side of his talent: writing. It's not known yet if a new president will be hired to take over his duties or if those duties will fall on Nelson. Hopefully someone within the company will be elevated to take care of most day to day duties of the comic side of the division. Nelson is going to have her hands full with all the other platforms she plans on integrating these comic characters. Plus she has to weed through all those characters to find which ones Warner Bros. is going to invest millions of dollars in to. All this she's going to be doing while handling the last Potter film(s). Nelson is going to be one busy Suit. All in all, it's a good idea to focus the brand and have a more clear direction for setting up the future properties Warner will have its logo in front of.

I welcome the coming competition between Bugs and Mickey...
Posted by Honor Hunter at 12:02 AM

Ms Nelson has said that she will not be moving into the role of Publisher. The E.I.C. and Publisher were basically the same position at DC st times in the past. The least disruptive move would be to give some of Dan Didio's editorial control to the editors, or writer-editors like they had in the 80's, and give him the whatever executive tasks of Levitz's that aren't being absorbed by Nelson. A lot of fan boys hate Didio, but he has done solid work since he came to DC. Another in house possibility would be to promote Bob Wayne, who's been running the collected editions department and retailer relations to Publisher. He's been a retailer, a writer and executive. There's nothing about comics that he doesn't know.

I'm interested in this new arrangement so long as it helps DC get interesting and well-done properties to the screen. I like the fact that, unlike Marvel, they haven't been just throwing whatever at the screen and hoping it will stick.

I thought Batman Begins/The Dark Knight, V for Vendetta and even Watchmen were very good, and I have high hopes for Jonah Hex. I'd like for them to keep carefully selecting properties and holding out for apropriate matches. My own votes would be for The Question, The Sandman (either version, Goth or Pulp), Doom Patrol, Enemy Ace, Adam Strange, Green Arrow and my all-time favorite hero of all-time ever, Plastic Man. Those aren't even ones I'm particularly enmoured of (except Plas)... just ones I think would make good movies.

In the mean time, all the whiney Marvel fans have driven me back into the waiting arms of DC Comics. I'm in the middle of vol. 2 of Justice and enjoying it immensely.