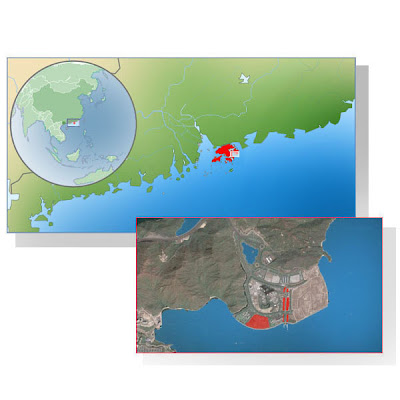 With all the talk about the Extreme Expansion of Hong Kong Disneyland, a few things that are glaringly obvious have been missing from the discussion...

We know that over the next four years there will the addition of three attractions in HKDL, but is that going to be all of the expansion?

No, it's most likely not, but the Mouse has been relatively quite about anything beyond this. Because there are some things that are missing from the puzzle. By the time Mystic Manor opens up in 2013 there should be something else open as well. Something not mentioned in any press release.

Unless the economy continues to sputter along, or the global marketplace suffers a worse downturn you can expect that piece of property in between the two current hotels to be open for business. Imagineers for a while now have been quietly toiling away designing another lavishly themed hotel to expand the offerings for guest who enter Disney's Fifth Magic Kingdom Gate. I've talked to a couple Bothans lately that are very pleased with the designs and although they would give away much for fear of joining Dick Cook, did tell me that the thematic layout of this luxurious hotel will definitely please Disney Fans/Geeks.

Most people know that the Hong Kong park hasn't met expectations with attendance, but not many realize that the two current hotels have had very high occupancy rates. And with the expected increase in attendance for the new two E-Tickets and C-Ticket, there is going to be an added desire to keep the guest on the resort. You don't want them coming for the day and then going home or heaven forbid, going over to Ocean Park. You'll need a new hotel to entice them to stay and spend more money. In essence, you have to create a way to keep them on that plot of land spending only on Disney. Kind of the way Walt Disney World creates all those hotels and shopping experiences that make you have little desire to venture outside it's very beautiful incarceration area. Hong Kong's plan is to do so, but obviously with less land. It'll be smaller but with the detail that Disney is widely known for. An intimate prison, so to speak... but one you'll willingly stay at.

So with an expanded area (with a whole lot of room for expansion) with three new attractions (and a possible surprise or two by 2013) and three hotels this area will still be missing something, won't it?

And yes, there is one in the plans, but it hasn't officially been greenlit yet, or at least it hadn't moved into that area when the Bothans last got word of it. It's still planned within the next five or so years, but it may not be open before the rest of this expansion. That doesn't mean things couldn't change, but it hasn't been the primary focus. But make no mistake about it, by the middle of the next decade there will be a shopping district lined along the walkway from the pier to the main entrance. After all, you have to give those guest a reason to not leave the resort/park/hotel. That was always the plan you know. It's just taken a while to get going, but as the next year or so rolls out you'll see more and more of it.

Over the next year or so you're going to hear more about this from the Mouse and myself and others, but remember that there is another park about to be born in the area. That may take the shine off of this park for a while, but remember that that Hong Kong will be a very important market over the next decade and the Mouse has every intention of turning this resort into a world class destination. That other park won't take away from that no matter how different and unique it will be.

But that's a story for another and later day...
Posted by Honor Hunter at 6:57 AM

Great to hear, I hope it's going to be something like the Yacht and Beach Club at WDW cause that would be really stylized.

Will the Downtown Disney look more like the American ones or closer to the Japanese one in Tokyo?

why the term intimate prison?

"why the term intimate prison?" Because Disney wants guests to stay on property as long as possible to spend money. The idea is to keep people "captive." thats why the post is called why "intimate prison"

But Honor, wouldn't you say being held captive at any disney resort would be a far better experience than being held in jail?

The Glue That Holds Us Together said...

"It'll be smaller but with the detail that Disney is widely known for. An intimate prison, so to speak... but one you'll willingly stay at."

Didn't you read this part?

I did read that part, I just think the analogy only goes so far, Sure Disney wants to keep you captive but thats where the parallels end.

I wonder what kind of theme they would go for if this 3rd hotel did get approved. They've got Victorian and Art Deco covered, so I'm wondering what's up their sleeves. Perhaps another Lodge similar to the Grand Californian or Wilderness Lodge to extend the theme of representing America in different perspectives. Or maybe even the Eastern seaboard like the Boardwalk, Beach, or Yacht Club resorts.

Also, are they favoring another deluxe like the HKDL Hotel or a moderate like the Hollywood Hotel? If it's additional rooms they seek, I don't see the point of needlessly spending hundreds of million dollars on a lavish design when something that is more simple/subdued would fit just as well and not be so heavy on a budget that should be going towards more attractions at the park.