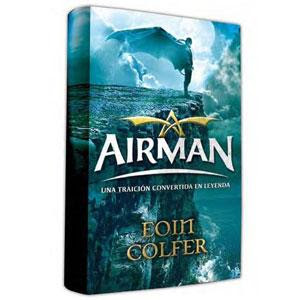 Disney and ImageMovers are planning on making an adaptation of Eoin Colfer's "Airman" novel...

Those that don't know, Colfer is most famous/infamous for Artemis Fowl, a series of books about a boy genius who finds out that the world of fairies is real. This is a series of books I suggested in another post that Disney should adapt into a film. It appears they've at least purchased the rights to the author's other works. Who knows if this will lead to other adventures in Eoin (pronounced Owen) Colfer's world.

The story of Airman involves a young boy named Connor, a boy who lives on an island off the coast of Ireland, where his father is the king's bodyguard. The king is murdered and Conor is framed for the crime, thrown into prison where he builds a flying machine to escape and rescue his family. It has a very Steampunk flavor to the story and hopefully Ann Peacock will write an amazing adaption for Gil Kenan to direct. Zemeckis will produce with Jack Rapke and Steve Starkey through their company for the Mouse.

Here's hoping the look is stylized and not photo-realistic like earlier and current ImageMovers films, oh, and a good story too...
Posted by Honor Hunter at 4:26 PM

I thought Artemis Fowl has been in development hell for years... I was raised on the books, and can't wait to see them on the screen.

It doesn't look good for that film then eh?

If its such a good story then really Disney should build it up for a proper live action blockbuster?
If animation is necessary why not the technically more talented animation studios at Disney?

Sorry i'm ignorant of the actually story so correct me if I'm wrong.

What studio is Artemis Fowl at now? I've heard for years its going to be made, but I don't know if it will ever see production.

For a minute there I thought you were referring to the upcoming "Epic Mickey" videogame, which has an extreme steampunk aesthetic. I can't wait for it. It's a revolutionary vision of the Mouse and his compadres, including his long-lost kidnapped cousin, Oswald the Rabbit. The art looks radical. The animation hearkens back to the 1930's retro-Mickey look. Which kicks ass. I'm surprised you haven't done a story on it yet, Hunter. It's worth noting.