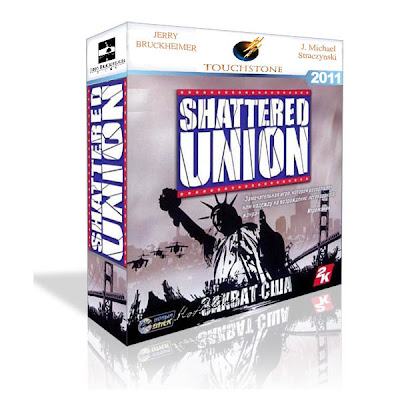 No, that headline isn't implying that Jerry Bruckheimer and Disney are severing their relationship...

Quite the opposite actually. The Bruck has been responsible for a good chunk of Disney's money over the past few years and there are all kinds of indications that that will continue for sometime into the future.

Bruckheimer has brought in J. Michael Straczynski to adapt a video game titled: "Shattered Union" for a theatrical film. The story is about the repercussions of what America looks like after a nuclear explosion destroys part of the east coast and the surviving states secede and form independent governments that battle for power and control over the continent. It sounds rather like Mad Max in America, to use a bit of high-concept speak.

We'll follow this to see how it progresses beyond a script, since directors and actors are going to help us determine where this project winds up. Will it be the silver screen or development hell? Only the line producer knows for sure.

Let me guess, Michael Bay directs, Hanz Zimmer scores and Nicholas Cage stars. Suckheimer, you are as predictable as the rising and setting of the sun.

If J. Michael Straczynski is involved, than it will be good.
I LOVE his comic work and I think he will do GREAT.

JMS needs to go back to Babylon 5. His comic work with Spiderman sucked.