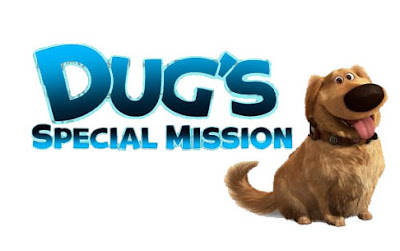 When the DVD for Pixar's "Up" comes out there will be more than to film to make you want to own it...

One of the many bonus features will be the all new short "Dug's Special Mission" featuring my favorite character from the film. Over at Moviefone they've got a one minute preview of the short. Naturally it's hilarious and totally Pixar. Go over and take a look at what you didn't see in the film. I love how we're getting to see other parts of the film's story that didn't wind up being seen on the screen.

That Lamp is one amazing place...

"This is our day my lieutenants, master will have much rew-"
"...hey, my pack is in the hole too!"

could somebody upload this to Youtube? They are blocking the streaming video outside of the US and I'd like to see the clip!! Thanks :)

Honor thinks talking dogs are funny. Because regular dogs already have a superior intellect in comparison to him.

Wow, you nailed me right there...

I didn't know anyone could see my soul so well, but you did it Anonymous.

But how do I feel about cats?

Actually Honor, I can see into your head. It's empty.

Also, rumor has it you're soulless.