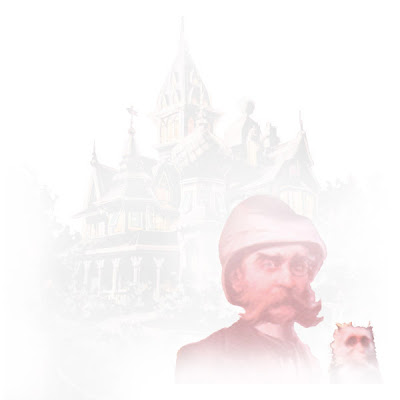 Of the three new attractions that Hong Kong Disneyland is getting over the next four years, one of them is clearly drawing the most attention...

In 2013 you'll be transported to the Edwardian Era of 1908, if you're going through Adventureland that is. Traveling through the dense, dark jungle you come upon a large estate built in the middle of this wild forest. Inside that estate lies a large mansion, a manor occupied as home and museum of the occupant. Lord Henry Mystic lives here and holds all the valuable relics he has gathered on his explorations across the world as an avid searcher, examiner and much valued member of the Society of Explorers and Adventurers. Thus begins your tale...

And that's how it will start. But before it does, the other two attractions have to be constructed. The Toy Story Play Land, which opens in 2011 and the Grizzly Trail, which opens in 2012. When 2013 comes around Disney's Fifth kingdom will finally have the Haunted Mansion that it was born without. I know, I know, some people have described it as a unique attraction and not a clone of the famous experience that originated in Disneyland, but that is its origin.

Perhaps clone is not the best word for it. Many people have seemed to take offense at calling it a HM clone and I've received several e-mails asking me for clarification. So let's say it's not so much a clone as it is a cousin to the ride. If you've been following the rumors about the HKDL expansion for the last couple years, you've likely heard about an "Adventureland version" of the Haunted Mansion that was being planned and designed. Well, this is the fruit of those rumors. Originally thought of as an extension of that land, it has now morphed into a separate land, a portal beyond Adventureland that exists in it's own right.

When Imagineers got together to work on Hong Kong's own version of the classic attraction, one of the things that was important to the designers and the Chinese officials they talked with was originality. No normal clones were wanted. WDI and the representatives felt that the Chinese should have their own HM; one that would express things in way unique to this park. The goal was to go above and in a different direction than the other versions of the ride which existed in the other four parks. The plan was to come at it from an original story line all its own, much like Tokyo DisneySEA's version of The Tower of Terror, which deviated from the original concept of the other E-Ticket versions of that attraction.

And while working on that original design of the attraction, they borrowed a bit more from the TOT story in Tokyo and added the linkage to Harrison Hightower III and the connection to S.E.A. as well. There were many elements that didn't make it through the blue sky phase including the addition of a night watchman (think "Night at the Museum" kinda story). Another area that was stripped was an additional scene in the greenhouse that could still happen in a second phase (maybe). And as always, WDI tries to add and advance stories with the newest technology, which is why this one has no Omnimovers, but instead an advanced version of the trackless vehicles you would find at "Pooh's Hunny Hunt." But slowly the essence of a ghost story and a haunting bride gave way to a story involving enchanted magic, mystical artifacts and a humorous narrative involving Lord Mystic's little monkey friend, Albert.

The attraction has gone through several phases and morphed into something far more than the original plans, but the basic idea of the Haunted Mansion rings true. It still holds the soul of that classic ride while infusing it with an entirely new and fresh story line that will lead many people to take a flight and purchase a ticket to this uncharted area of Disney's Fifth Kingdom. Which is after all, what Imagineers intended. When it opens, it will undoubtedly be the focal point of the resort. A place and experience no other Disney park has. This will be something that the resort can hold up that Ocean Park can't mimic. It'll be a perfect example to show the Chinese how Disney can be only be done by Disney. Now, if you'll excuse me, I have to go and reserve an airline ticket. You don't thing it's too early do yo?

When is the US going to get one of those trackless rides?

I hope that after a few years, the other parks can get a "version" of this for theirs as well. It would fit perfectly in TDS, DCA and WDS in Florida and Paris. Bravo WDI!!!

Paris is getting the same ride system in the Ratatouille dark ride. :-)

It's really a shame that Toy Story Land is going to muck up the expansion... Grizzly Trail and Mystic Point both look spectacular.

We need a trackless ride in DCA!!

Yea all parks outside of America will have something trackless coming over the next few years.

So will there be anything for Disneyland and WDW coming at some point in the future? Possibly as part of the expansions at either resort as the next phase after the announced projects?

I wonder if a trackless Great Movie Ride would work in Hollyoodland (as it will become).

Alec:
"It's really a shame that Toy Story Land is going to muck up the expansion... Grizzly Trail and Mystic Point both look spectacular."


The recent output of Imagineering has been less than satisfying to say the least. The whole Toy Story Land just seems to be an extension of Flick’s Fun Fair. For Lasseter to accept all these minimally themed carnival rides as Disney attractions makes me question his abilities.

Even the dark rides in Fantasyland, as old and simple as they are, have more creativity involved in their creation than the Toy Story Land appears to have. It’s almost like Disney’s recent strategy of sticking clones in every park, but this one, which I would expect in DCA, is being foisted on Hong Kong.

Of course, given Hong Kong’s initial layout, I guess I should be more surprised at Grizzly Trail and Mystic Point, areas that appear to be beyond HK expectations. Was the TS Land model at the D23 Expo an apparent quick replacement? It wasn’t finished to the detail as the other areas. If so, was it just some quick and dirty replacement for something that they didn’t want to show yet, or was it actually something that they are seriously considering?

Mind you, that's no excuse since one way or another Paris is getting suckered into Toy Story Land without being given the alternative (presumably).

I suppose it can be worse if not done right. I was disappointed with the significantly altered (in my view) of DCA's Tower of Terror. The new ride track (different than WDW's version) has changed the ride quality significantly and made the original storyline of the ride rather puny. There's a lack of story flow and the resulting climatic drop was anti-climatic. No built-up and a lack of suspense. A bit of a miss.

I think that there must have been a memeber of the Society of Explorers and Adventurers that explored the Old West maybe even Lord Henry Mystic himself.

Where am I going?

How about the back side of of Tom's Island at DL or if not there then in an 2nd phase expansion/update to the Wilderness area of DCA. Another E ticket at DCA to spread out the crowds. And yes trackless of course. Why not be the first park in the US to do it?

Just thinking outside the box here.

Does anyone know if there's room behind the Beauty and the Beast area in the Magic Kingdom's Fantasyland expansion for a Dark Ride? I thought I heard that there would still be an expansion plot there for a future ride, and I could certainly see the trackless system making for a brilliant Beauty and the Beast Dark Ride. Imagine that though, having two World-Class dark rides built right next to each other within two or three years in a whole new sub-land. New Orleans Square anyone?

I could see Lord Henry Mystic's mansion fitting in well with WDW's Beastly Kingdom - if it's ever built. The storyline could be tweaked so that Lord Henry could be an explorer of strange worlds and mythical creatures, and the rooms of the house could have pictures, trophies etc involving dragons, unicorns, griffins, giants, banshees, and so on. Could make a truly great dark ride. God knows WDW could use a few more of those. The last stellar one they built was Tower of Terror, which was a long time ago...

WDW already has a Haunted Mansion so it won't be going there...

It's one with a much stretched story line and its variation makes it more a cousin than a clone, but WDI won't put it there.

But something as creative might be able to go there. And the S.E.A. could possibly work quite well in DAK.

Now wouldn't it be nice to see that Society in DCA? Not sayin', just saying...

WDI is having S.E.A. as the backstory for their Asia's Disney Parks, which also mark the unique point for these parks. They could have more guest flocking in to HK Disney and TDR with fresh themes that can't be found anywhere else, otherwise the Asia's parks are simply becoming more and more conventional clones of the others.

Do you think is there any reason that the WDI is going to use these themes on WDW, DCA, or the others?