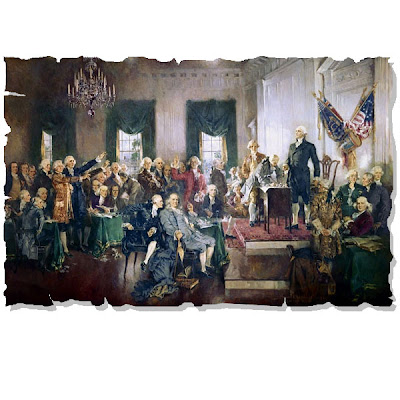 Happy 4th of July! 1300 words celebrating our liberty were put with a quill in ink upon paper this very day. A day on which we celebrate the freedoms that our Founding Fathers gave to us on this historic event in 1776. You may not believe it, but there was a time early on when people didn't really know which day to celebrate our founding, either the Declaration of Independence, which was signed on July 4, 1776, or when the Constitution was passed on September 17, 1787. It took many years for the tradition to take hold and become the celebration we now know it as. By the time our fiftieth anniversary had come along, it had taken hold and on that occasion, something very poignant happened.

Our second President(John Adams) and third President(Thomas Jefferson) both died on that day... in the same year, 1826... just as we were celebrating the 50th anniversary of the United States of America! And the president at the time was John Quincy Adams, the son of the former president. Both Adams and Jefferson had been bitter rivals in the early days of our founding. Years later, they started up a correspondence and eventually became friends. But the rivalry still remained. When John Adams breathed his last breath he was heard to say: "Jefferson still lives." But he was wrong. Jefferson had passed away a few hours before him earlier that day. Coincidence? No. Not in my belief, at least.

Happy 234th Birthday, America! Everyone go out and celebrate the freedoms and liberty given to us by our Creator, acknowledged by our Founders and defended by our Forefathers...
Posted by Honor Hunter at 1:19 AM

I really enjoy this site . . . and it's little tidbits like this scattered among the Disney news breaks that up the bar.

Just re-read the Declaration of Independence and your summary of the day fits right in.

Thanks and Happy 4th.