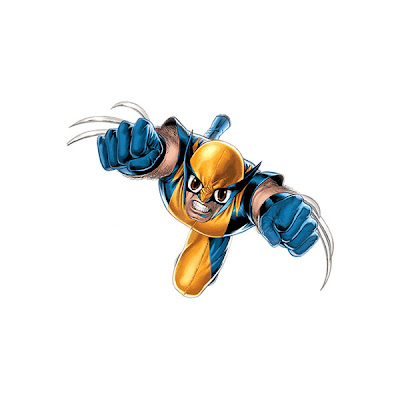 A lot of stuff got announced over the past four, crazy days...

Strangely, a lot of DC Entertainment announcements that had been expected thanks to Geoff Johns teasing didn't. Shame on him. Something had to be up though, and I expect we'll be hearing details about Warner's schedule as we get toward the fall. I think that they're being cautious right now, but come next summer, with "Green Lantern" we're going to be in the middle of a blizzard of DC news (especially if GL turns into a blockbuster).

Now with that said, there was a lot of Marvel announcements over the weekend, but while everyone was talking about the "Thor" panel, the "Captain America" panel and the unveiling of the assembled at the "Avengers" panel, other Marvel news was announced by head of Marvel TV, Joseph Loeb.

We know that DisneyXD is getting a couple of series to bring in the boys (actually, a couple more projects are already on the drawing boards). But it was announced that four new half-hour series/12 episodes each, based on Marvel characters done in the "Anime" style would be coming to G4TV in 2011. That's 24 hours of Marvel mayhem for those that went to public school. I know most are asking why this isn't being shown on XD as well, and I believe it's because the stories and plot will be more mature in nature and they want to distance those type of stories from what will be seen on Disney's "Boy Channel."

I have faith that these shows will be of a certain level of quality because of who is overseeing them: Warren Ellis. With his guidance and a more free reign to have some different takes on the Marvel Universe, this could be fun. Here's the press release:

Los Angeles, CA, July 26, 2010 - G4 will be the exclusive U.S. television home of four brand-new anime series featuring some of the most successful and iconic brands from the Marvel Universe. Produced by Madhouse for Marvel Entertainment and Sony Pictures Entertainment Japan (SPEJ), these four original series will feature iconic characters from "Iron Man," "X-MEN," "Wolverine" and "Blade" in an edgy new anime world. These series will premiere on the network in 2011, it was announced Friday at San Diego ’s International Comic-Con.

"We are excited to partner with Sony Pictures and Marvel to bring these incredible icons to G4," said Neal Tiles , President, G4. "Marvel has shattered box offices around the world and captured the imagination of our G4 viewers. Combine that with the passionate following the world of anime brings with it, and we believe this project has incredible potential for the network”.

Jeph Loeb, Executive Vice President, Head of Television at Marvel Entertainment said, “Bringing Marvel and our characters to G4 is such an awesome opportunity. The size and scope of the animation from top-flight studios Madhouse and Sony Pictures Entertainment Japan is nothing short of mind-blowing. We look forward to the start of a beautiful friendship and can’t wait to see the reaction from our worldwide fan-base.”

Each of the four new anime properties - "Iron Man," "X-MEN," "Wolverine" and "Blade" - will air as standalone series made up of twelve 30-minute episodes. Guided by multiple Eagle award winner Warren Ellis, the four shows will feature a matrix of interlinked storylines and shared guest characters that further enhance this intellectual roller coaster ride for G4 viewers.

In an effort to make amends for his weapons manufacturing past, Tony Stark has dedicated himself to building the world up rather than tearing it down. Traveling to Japan to build a new arc reactor that will deliver unlimited free energy to the Japanese people, Stark is challenged by the Japanese government and the media when he attempts to import the necessary nuclear priming device. And when the reactor-in-construction is repeatedly attacked by the mysterious Zodiac consortium, Stark must gather his allies to take on Zodiac and its mastermind.

The X-MEN are reunited following the death of a teammate, and are summoned by Charles Xavier to Japan following the abduction of Hisako Ichiki (Armor). There, they confront the U-MEN, a lunatic cult that steals and transplants mutant organs to further strengthen their own army, and the battle for justice is on.

Based on the popular graphic novel by Frank Miller, the series begins in Japan , where Logan is challenged by Shingen Yashida, the notorious leader of a powerful mafia clan. When Shingen's employee Yukio, a female assassin, falls out of Shingen's favor, she must kill him or be killed. Teaming up with Logan , the pair seek out the villain to exact their revenge.

Eric Brooks -- known as Blade -- seeks revenge on Deacon Frost, the vampire lord who killed his mother while she was still pregnant with Eric. With all the powers of a vampire and none of their weaknesses, Blade's quest leads him throughout Southeast Asia in search of Frost, and, in Viet Nam , he discovers a vampire plot that threatens to take down the whole world.

The new "Iron Man," "X-MEN," "Wolverine" and "Blade" series will be produced by Madhouse and Marvel Entertainment in association with Sony Pictures Entertainment Japan, and will make their exclusive U.S. TV Premiere on G4 in 2011. Sony Pictures Television is the distributor.

Marvel Entertainment, LLC, a wholly-owned subsidiary of The Walt Disney Company, is one of the world's most prominent character-based entertainment companies, built on a proven library of over 5,000 characters featured in a variety of media over seventy years. Marvel utilizes its character franchises in entertainment, licensing and publishing. For more information visit www.marvel.com.

Based in Los Angeles , Comcast Entertainment Group operates E! Entertainment Television, the 24-hour network with programming dedicated to the world of entertainment, and E! Online; The Style Network, the destination for women 18-49 with a passion for the best in relatable, inspiring and transformational lifestyle programming; and G4, offering the last word on gaming, technology, animation, interactivity and "geek culture" for the male 18-34 demo. E! is currently available to 97 million cable and satellite subscribers in the U.S. and the E! Everywhere initiative underscores the company's dedication to making E! content available on all new media platforms any time and anywhere from online to broadband video to wireless to radio to VOD. The Style Network currently counts 65 million cable and satellite subscribers and Mystyle.com keeps women up to date on all the latest fashion and beauty news on the web. G4 is available in 70 million cable and satellite homes nationwide and G4tv.com is a top web destination for video game news and information.

Sony Pictures Television is one of the television industry’s leading content providers, producing and distributing programming in every genre, including series, telefilms, theatrical releases and family entertainment around the world and for every platform: broadcast and cable television, first-run and off-network syndication and digital distribution. SPT is a leader in local language productions around the world, some of which are co-produced with local partners, and sells SPE-owned formats in approximately 70 countries. SPT's worldwide television networks portfolio is a key strategy in SPE's long-range commitment to the global marketplace, with 122 channel feeds, which are available in more than 140 countries reaching almost 438 million households worldwide. Additionally, SPT owns premium video website, Crackle.com, Dutch entertainment company 2waytraffic, production company Embassy Row, an HD movie channel and is a part owner of cable channel GSN, a new 3D channel, FEARnet, the premier horror/thriller website and VOD service, and national media sales company ITN Networks, Inc.

Well these anime series have been known about for a while.
Willing to give them a try if they ever make it to the UK.