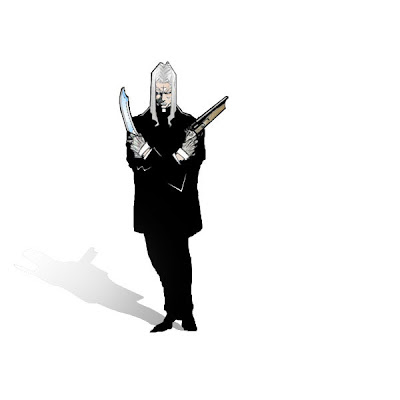 So I got another call from the Colonel...

Seems he attended the Sony panel that had there films on display for the Con-Goers, "Priest," "Green Hornet," and "The Other Guys." He was apologetic and giddy all at once. Sorry for his EPIC FAIL on the "Tron Legacy" panel, but stoked that he was able to get into this panel. But for reasons other than why he went in.

"I am a convert to 3D!" He told me. You see, the Colonel has for the most part, always been a skeptic about wearing glasses. Comes from all those years he used to scream down at the enlisted men, calling them "four eyes" and whatnot. But after seeing some of Sony's presentation, he's starting to warm to it. He didn't think you could take a film that wasn't shot in 3D and make it look good. He was wrong. I guess he's finally recovered from the "Clash of the Titans" experience and this ain't it.

What was it that he found so seductive? Well, there was the three minute trailer that showed a lot of cool action and slick/sick violence. And then there was that opening sequence for Priest that was animated by Genndy Tartakovsky which blew his mind. It was wickedly violent in an almost unbelievable way. But that set the stage for the rest of the film. For those that don't know, Priest is a loose adaptation of a popular Korean manhwa title. And for those that don't know what manhwa is, well, what comics are to America, manga is to Japan and manhwa is to Korea. Now for those that don't... ahh, to heck with it. It was published here by Tokyopop. Try and keep up, please.

Well anyway, Scott Stewart introduced the clips and provided the description of things. It seems to take place in an alternative world where Christians battle Santanist in wars that have lasted centuries. Karl Urban plays the villain, Black Hat and the scenes they showed happen to make Kurtz feel that this is a much better film than "Legion," which he was forced to watch. Luckily he didn't have a cyanide capsule or this trip to San Diego wouldn't of been possible. But there were some interesting scenes with trippy vampires and intense action. The mood was good and the third dimension was actually cool. He's planning on buying a ticket to this one, which says a lot.

Next was "The Other Guys," which was originally known as "The B-Team." Get it? Like A-Team, so on and so on... Yeah, the Colonel was laughing about that, being as he's one of the few that went and saw that film. It brings back nostalgia for him. I don't know if it's for the 80's or his years in combat, but it gives him the flutters every time someone fires a gun. Anyhoo, back to the film. This was the best of all three films. It's going to make a ton of money. Make that tons (plural). The cast and crew were hilarious and Adam McKay and Will Ferrell were in prime form. This looks like it was the favorite judging by what Kurtz was noticing.

Then there was the "Green Hornet" film. What did he have to say about this? Well, once the stars and director were announced and took the stage, people started heading for the exits. Seems it wasn't a lot of people's cup-o-tea. They showed a clip that looked Ok, but nothing earth shattering. They're playing it over the top, but it fell flat on the dear Colonel. Nothing that he'd want to see on opening night. He thinks it's going to bomb. I don't know if it will, but I'm agreeing with him. He and I are also in agreement that Seth Rogen, whom I like, is not Britt Reid. This seems to be a misfire by Sony. Hopefully, we turn out to be wrong, as I don't wish any one or any film to fail.

And then a dial tone filled my ear and he was gone. He had to go to another panel and promised me he'd make the Marvel panel tomorrow, but he wasn't sure about the DC panel. It figures coming from a guy who's favorite character is Spider-Man. The Colonel's taste, not mine.

Expect tomorrow to be filled with an unbelievably amount of insaneness...

You Green Hornet haters are going to be eating soooo much crow when this thing comes out in January. Seth is going to go down as THE Britt Reid. You're probably the same people that thought Michael Keaton was a horrible Bruce Wayne. Well, look at him now. He's the one everyone thinks of when they imagine the character, not mister gruffy-voice Bale. What a joke.

I believe that you're wrong about the Priest 3D, I think it was shot that way, not converted.

Actually, the director said it was a conversion, but you wouldn't know it looking at the footage. It was fantastic. Whoever did it did a great job. It's obviously not the ones that did Titans.