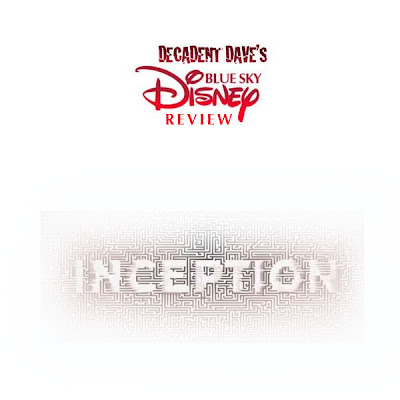 Every generation has at least one great visionary director whose creative genius transcends their visual craft in a way that defies the conventional norm and is revered by critics and audiences for their originality and brilliance. Christopher Nolan is, without doubt, this generation's Stanley Kubrick, Alfred Hitchcock, Ingmar Bergman, Akira Kurosawa, or Orson Welles and will long be remembered among that pantheon as one of the greatest film directors of all time.

Inception is the movie that The Matrix wanted to be but wasn't and only dreams that it could have been while it was more preoccupied making itself look cool with science fiction technology and special effects, it merely stood at the precipice of the elaborate canvas of storytelling genius that Nolan presents us here with Inception's intricately complex and labyrinthian narrative as he so masterfully demonstrated in Memento (2000) that relies upon virtually no science fiction technology at all, simply the dreams and imagination of its narrative construct. There is never a dull moment as the viewer's mind is forced to keep up with the expository action racing along like a proverbial freight train. The special effects are relatively seamless and exist only to support the rich, complicated framework of its story rather than distract from it with gratuitous explosions and an overindulgence of CGI that dominate the morose offerings of modern summer movie blockbusters. Nolan's visual scope and canvas are vast and epic but grounded in a believable and conventional reality, an illusion every bit as effective as the slight-of-hand deception of The Prestige that will leave the viewer questioning what reality really is and which level of reality they are watching long after the film has ended.

There are plenty of nods and send-ups to Nolan's favorite films and their influences are evident throughout, the most obvious of which being Blade Runner which Nolan is quoted as his biggest inspiration and also On Her Majesty's Secret Service which he cited as his favorite James Bond film. For my money, they should just hand the keys to the Bond franchise over to Nolan right now and let him re-invigorate it with the same sophistication and panache that he brought to the Batman franchise with Batman Begins and The Dark Knight. Tom Hardy already proved his theatrical range as a serious performer with his breakout performance as Bronson (2009) and delivers an exceptional supporting performance as Eames mixing sly wit with a focused intensity that would be perfect to see him bringing to the role of future James Bond.

Although I've never really cared much for Leonardo DiCaprio as a leading actor and have always regarded him as that "kid" from Titanic but I was completely taken by his emotionally intense performance as Cobb. Nolan has a knack for casting only the best actors of the highest caliber for his roles and here Leo proves that he is more than a capable leading actor of his generation. Cillian Murphy, Ken Watanabe, and Michael Caine once again bring an heir of class and benediction to their supporting roles as they had done previously in Batman Begins.

Hanz Zimmer's intense score for Inception is extraordinary delivering a lucid electronic ambiance that is both as ethereal as it is urgent, even darker and more melancholy than his score for The Dark Knight. Zimmer composes an auditory dreamscape that compliments the visual experience of the film by implanting its haunting melody in your mind and staying with you long after you've left the theater.

Summer 2010 was looking pretty bleak until Nolan came along and rescued it much like he did in 2008 with The Dark Knight. All my fears and doubts about how he was going to top that with the third Batman film have easily been subdued. I have no doubt in my mind that he will deliver a spectacular finale to his chorus of Batman films with the same sophistication as he has demonstrated in Inception. The Dark Knight is in good hands. Now, just let him have the keys to the Astin Martin and let him write his own ticket. Nolan is the real architect of our dreams.
Posted by Decadent Dave at 7:27 PM

I have always felt that The Dark Knight was way over hyped. I feel that Nolan is given a pass on everything he's done. Sure, he's a capable film maker, but to compare him to someone like Hitchcock or Kubrick is highly unfair to them. To say that he is anywhere near someone like Kurosawa is laughable.

Great review, Decadent Dave. I can't wait to see this. It's my numero uno pic to see this year since I first heard about it.

Nolan is the director that will define this decade.

More of a reaction than a review. This is the kind of film you simply have to go see and the less you know about the plot the better. Nolan is going to be regarded as one of the great directors. You'll see. I'll show ya.

I can't wait to see this over the weekend. I haven't been so excited waiting for a movie since I was a kid.

I'm not one to buy into the mass hype behind most movies. I watched The Dark Knight on BluRay and thought it was a good film but not as great as everyone made it out to be. I didn't care enough to see Avatar, and I had a slight interest in seeing Inception until everyone started talking about Christopher Nolan being the next Sliced Bread.

I can't stand it when a movie becomes more about the Director then the movie itself.

Maybe on DVD or BluRay. But I won't be seeing this in Theatres.

meanwhile The Sorcerers Apprentice is the next flop out of the mouse house. Maybe now they'll rethink this Franchise out of the gate philosophy they have. And just focus on making movies without an agenda.

In Inception's case I think it is perfectly fair and valid. Nolan wrote the script himself and directed it. It's his vision. Nolan has a proven track record. Every one of his films has consistently been good and I can honestly say the guy has never made a bad film to date. The Dark Knight is Batman so if you aren't into that sort of thing then it's just not your cup of tea to begin with but his approach to the material was exceptional and far exceeded what had been done with it before. A director of his talent working today is rare considering the big name directors in Hollywood are mostly talentless hacks like Michael Bay so I think the adulations for Nolan's work are appropriate and the fact that he created something new from his imagination that was not another pointless remake, re-imagining, reboot, sequel or prequel is a welcomed breath of fresh air. I have every confidence in his judgment and ability as a director and look forward to not only Batman 3 but anything else the guy makes and will take it on blind faith. In Nolan I trust.

Nolan could make a movie about the phone book and it would be an amazing work of art.

I liked the movie a lot, a solid B I'd say. [Spoilers ahead]
A quick summary: it's The Matrix crossed with Shutter Island.
If this movie had come out before those two it would have been a home run. As it is though it comes off as a bit derivative (of course it's not Nolan's fault that Shutter Island cam out so recently, but Leo and wife stuff was so similar that it was a constant distraction).
Another problem I had was that the marketing gave everything away. With all the secrecy surrounding this project from day one I had assumed that the awesome-looking bits in trailer were just the tip of the iceberg. So i was kinda disappointed to find that every cool scene in the film had already been shown in the trailer and on billboards.
Even though I've enjoyed all of Nolan's films I'm often left frustrated by how close they come to greatness without quite getting there. Here I was especially let down by the dream-world itself. All I could think was, 'who has such boring dreams?' Sure the gravity and the architecture could go a little screwy, but that was about it (I know that most of the dreams we saw were constructed in order to fool people into thinking they were awake, but still).
There were a variety of smaller issues, plot holes, etc. but the ones above bugged me the most.

Once I read this statement, I quit reading seriously. Not every generation has a giant like that to represent them, and it's ridiculous to include such an overhyped small-fry in the company of such true visionaries.

This isn't a review; it's an embarrassing record of a fanboy's unconsidered opinion.

"This isn't a review; it's an embarrassing record of a fanboy's unconsidered opinion."

You're a retard, Anonymous. I and many others agree totally with Dave, he's spot on. And you're living in the past to say that no one can reach the levels of Kubrick or Welles. Nolan is an amazing film maker that has yet to make a bad film. Personally, having viewed all of Hitchcock's films, Kurosawa's films and Welles films, I can't say the same about those men. They are great, talented and have careers filled with works that others can only dream of. Nolan is still young and may someday make a stinker, but he hasn't so far.

If you're saying that Nolan isn't perfect so he doesn't belong up there with those directors, you're right in saying he's not perfect.

But neither are they.

Maybe it was the theater I went to, but I think some people might be too stupid for this movie. Before the film started, I overheard a girl ask what "inception" means. She thought it was a word made up by the film.

After the film, I overheard somebody else talking about being confused by the fact that the van was in slow motion while everything else "was normal." Don't people pay attention when they watch movies?