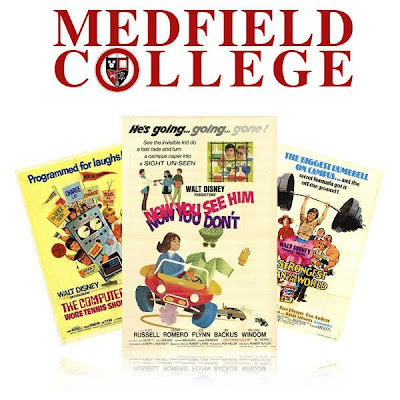 On this day, thirty-eight years ago, Walt Disney Productions "Now You See Him, Now You Don't" was released in theaters...

I loved watching these silly, flippant, and just plain fun films as a kid. I mean, really, how cool could a school be that Kurt Russell attended? The film, was the second in the "Dexter Reilly" trilogy of films featuring the wacky antics of some way out college kids, set in Medfield College. I would call it the Medfield Trilogy, but these are not the only films set in the well known, yet fictional college. "The Absent-Minded Professor" and "Son of Flubber" as well as the remake, "Flubber" were all set at the school. Bet most of you didn't know that, did ya? Also, the fight song of the school that we hear in the Fred MacMurray film was composed by none other than the Sherman Brothers.

In case you don't remember, here are the three films:

A while back, there was buzz going around that the Mouse was working on another film or reboot of the series, but alas, that project now resides in development hell. Perhaps someday it'll get a reprieve and wind up making a great, fun film starring the likes of Zac Efron and Corbin Bleu as, errrr, wait. On second thought, I think staying in that state sounds better than what I just said. Of course, if they were to make a well written project starring real actors and not tween heartthrobs I'll reconsider my opinion.

Until then, I'll look forward to attending the Fortieth class reunion...
Posted by Honor Hunter at 1:42 AM

My girlfriend and I just watched The Computer Wore tennis Shoes this past Friday. We're working our way through the Dexter Riley trilogy, and many other great, often forgotten Disney films, thanks to Netflix. It really is a shame that Disney has opted to forgot about so much of their catalogue.

honor hunter, i just gained an entirely new respect for you

Kurt Russell is a joke.

And let's not forget that the Disney Studio, itself, was the stand-in for Medfield College. :-)

The school was Merivale College.

Speaking of Forgotten Disney films, how many of you have seen:

Really only one of these deserves the Criterion Blu-Ray treatment (Never Cry Wolf). The rest were the final gasps of air from the Ron Miller era. Night Crossing and Amy are very good, as well.

What about The Misadventures of Merlin Jones? I love that movie.

Where did The Misadventures of Merlin Jones take place?

Originally Posted by Stephen Wacker:
Dear new corporate overlords…in all humility I beg you to please—as your first order of business—let us here at Spidey Sentral take the first comic crack at this wonderfully winged character, restoring this feathered, falcon-esque funseeker to the heights he so rightly earned in the barely seen, hardly remembered 1981 feature film.