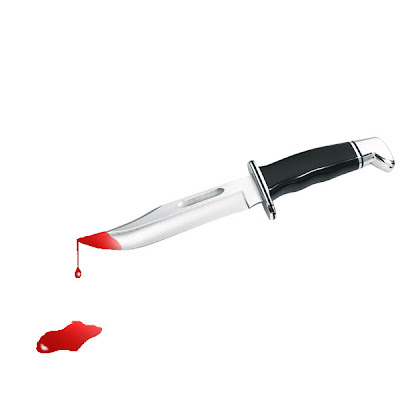 Just got off the phone with the Colonel...

While waiting for the "Cowboys and Aliens" panel after sitting through the "Let Me In" panel a fight broke out. In the hot weather in San Diego tempers can sometimes flare even at the Con, but usually nothing really happens.

Someone got stabbed. Two suspects were being taken in and there were a whole lot of police walking around Hall H. The events got postponed/delayed and some poor guy got stabbed by an idiot with a temper to match his IQ. I told you that this place is crazy this time of year.

I expected madness, just not that kinda madness...
Posted by Honor Hunter at 5:42 PM

Labels: Comic-Con, Cowboys and Aliens, Let Me In, Panels

I am so tired of hearing about the Colonel and his EPIC FAIL. Colonel Sanders needs to man up. He probably issed off the guy sitting next to him in Hall H so he deserved to get stabbed with a pen.

The weapon was reported to be a pen in Nicki Finke's blog...

Yeah, I talked to him afterwards and he confirmed that. With all the ruckuss in Hall H, he just heard no one knew for a few minutes what they were stabbed with.

Idiots had to go and spoil everyone's fun. Sigh...

I think the person is all right though, which is good news.