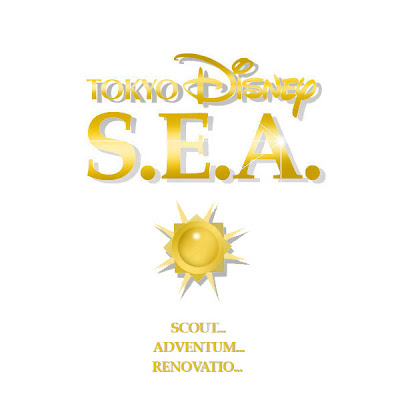 There are many things about Tokyo DisneySEA that are wondrous and amazing, but I'll bet most of you didn't know the secret side to DisneySEA...

Or should I say S.E.A.? Remember that the park is themed to the oceans and aquatic encounters of the world, but it's also themed to the world of exploration. In fact, most people don't know about a hidden Society that lives and operates inside the ports of Tokyo DisneySEA. A secret organization that deals in mysterious and dangerous things. A group of people that are responsible for many of the structures that the Imagineers sometimes take credit for.

A club for those that believe the world should be examined and enjoyed, charted and experienced. In fact, the name of this club is right out in public and no one ever notices.

Tokyo DisneyS.E.A. I'll bet you didn't know that the name of the theme park was actually an acronym for something else, did you? Those three letters stand for an organization that's done a lot for the park, in fact, it's done quite a bit for the Asian area that Disney has been smart enough to host and this club has been generous enough to let the company in on some of its knowledge and customs. In fact, the very culture of TDS is heavily influenced by this Club/Group/Society. And it was all under our noses.

May I present to you, "The Society of Explorers and Adventurers." Also known as S.E.A., the organization that is responsible for several places and parts inside the most beautiful theme park in the world. I bet you didn't notice that the "SEA" in Disneysea was all caps, did you? Or if you did, you didn't think much of it. Just a nice stylization most would guess, but they would be wrong. As with all great layering and narrative in the Disney world, this park has it in spades.

And this organization has been around for centuries, maybe a Millennia even. Those of you that have been to DisneySEA will recognize probably the oldest known building belonging to the organization: The Fortress Exploration area of the Mediterranean Harbor. It was constructed in the earliest known days of the secret organization. With the help of visionary men like Leonardo da Vinci and others. The place is a perfect example of how the members of the club strike out to search for arcane knowledge, unique exploration and thrilling adventure. Many of the artifacts you find throughout the resort were graciously donated to the Disney Imagineers by members of the club. Their Society has allowed the tours and examination of their dwellings and treasures in this little plot of land in Asia. One of the most well known members (some would say infamous) of the S.E.A. Club is Harrison Hightower III. Or at least he was before his mysterious disappearance several years ago. His Gothic, dark and opulent Hightower Hotel was opened up for all to see the wonders of a man whose sometimes unseemly desire for treasure hunting is accomplished through less than ethical methods. It's not known actually how many members are in the club as they keep the order and rituals of their organization mostly secret... mostly.

Disney's latest theme park in Asia, Hong Kong Disneyland has a connection with this society or at least it will in 2013. When an area most guest haven't been allowed to enter, opens up. The Mystic Point location happens to hold Mystic Manor which is owned by Lord Henry Mystic. He happens to also be a member of S.E.A. and is a club rival with Hightower. Although, Mystic is known more for his admirable qualities than the missing adventurer and hotel owner ever was. And right next to his manor you'll find a great little place to soak up the 1908 atmosphere called, The Explorer's Club, where you may just find some treasure and a S.E.A. member or two. And you know what? There're more of the Society's club members spread throughout this magnificent world... this Disney world.

And who knows when and where in the future the Society of Explorers and Adventurers will show up next...
Posted by Honor Hunter at 12:01 AM

Labels: Disney Sea, Imagineering, Layering on the Narative, TDS, The Society of Explorers and Adventurers, WDI

A return of the Adventures' Club to our WDW landscape? Somewhere?

Very cool, Honor. I did not know that.

Will they have an outpost at Paradise Bay near Little Mermaid's palace?

t is just AWESOME! Someday, I shall get to experience the wonderment that is DisneySEA myself!!!

Kungaloosh, bring back the Adventurers Club to Orlando! Some days you eat the bear, some days the bear eats you, but always dress for the hunt!

I am looking trough my appropriated data and I am confused. What could this mean for the future of WDW? Also, I would like to know where the "sometimes the bear eats you" quote comes from, obliviously from The Adventurer's Club in some capacity, but did it originally come from that establishment?
Maybe this means Mr. Bleehal can have another chance to acquire a Balderdash cup after that New Year's eve in 1937 where it was taken from him?

With hope that something Adventurers Club esque returns back to WDW, not for me, but all those moaning fans that are missing it like they lost a leg.

This is quite clever, good interconnectivity!

I hope the Society of Explorers and Adventurers build some things here in America.

I wonder if this has any relation to the old Discovery Bay plans for Disneyland way back.

I am also related to Lord Henry Mystic...

I think another Mystic Manor would fit in Animal Kingdom.

Yes, I've known about S.E.A.
As you said, they're the founders of Explorer's Landing in Porto Paradiso. And my prediction is confirmed to be true, that Hightower III is one of it's members. There still many men of exploration out there who are members of the Society, I belived mostly are scientists, explorers, and entrepeneurs. From what I knew, the Society was also founders of Porto Paradiso which originated in the Rennaisance era, the golden era of exploration. They try keeping their existence secret (as you've said as well), this included the whereabout of Porto Paradiso, I heard. History has it that the island which now became Porto Paradiso was an island never charted on the map, or you can say a very much concealed island hidden by the strange weather around (I found that this might relate as to why TDS's theme also have a fond realation to weather, as evidence in Port Discovery). I'm sure there are more secrets yet to be unravel.
But let's not spoiled them all. The world is more wonderful when there's lot of mystery in it, isn't it? So we can carry on the exploration... ("Exploratio Continua")
Thanks for sharing your knowledge on S.E.A. I'm glad I can share this discovery with someone. Really looking forward to visit Tokyo Disney S.E.A.

Wow! That's one great elaborated story of the Society..
Where did you collected all those details?

Can't wait to visit the S.E.A. Club in HKDisneyland once it's up!!