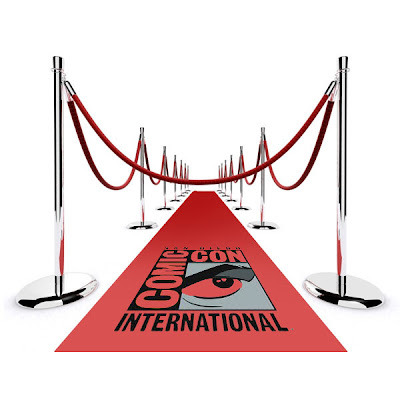 Everything moves and turns, becoming something else. You either evolve or die. For the majority of the 20th century, the Cannes Film Festival in France was the preeminent place to show films, make deals and see what was coming down the line. Slowly, over the past couple of decades in general and the last decade in particular, that has changed.

If you want your film shown, known or plan on making deals for a new generation of filmgoers, then you better be in San Diego for The Con. Comic-Con is the new place for film. Oh, I'm not saying that the films or stars will go away from that celebration in Europe. And Sundance will still be there, to a diminished degree at least. But Comic-Con IS the new place, for good or bad, to be in the know of what is culturally hot. And what will be.

The number of studios and stars showing up keeps growing and growing. The marketing has gone from a few posters, banners and a few behind the scene photos to the kind of advertising you'd see for an Oscar campaign. Elaborate displays and previews of new films that won't be seen by the general public for sometimes a year or more. Comic-Con has become more than just a few events set up around finding the back issue of your favorite comic that you happen to be missing a few issues. You used to be able to get copies of your favorite television show that is no longer on the air and not yet on VHS (now DVD), but know you wait in large rooms filled with screaming fans waiting to see a cavalcade of producers, directors, writers and actors talk about projects that sometimes even the trades didn't know about yet.

We'll be here at Blue Sky giving you the skinny on what Colonel Kurtz's perspective of what he saw and the events and parties he attended. I just wish I'd be there for tomorrows "Tron Legacy" panel, but the real world calls.

the Cannes Film Festival in Italy ? Whoa, let's put it back in France where it belongs, shall we ;)

Late night of drinking and incorporating where I was. Hehe...

That's the trouble when you mix drinks start typing...

Tell that to the Studios, they're starting to think the same thing.