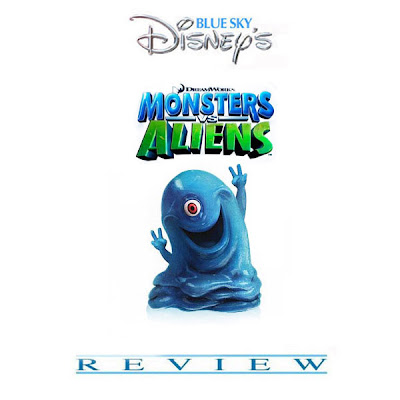 Ahhh, my Bothan Spies are everywhere...

One of them, a friend that goes by the name Urban Myth was lucky enough to a see a screening of "Monster vs Aliens" last week and sent in this mini-review...

"For some reason I wasn't expecting much from Monsters vs. Aliens (MVA.) I'm not a super huge comic or Sci-Fi fan, and I've definitely had my fill of Dreamworks films relying on pop culture references. But I have to say I was pleasantly surprised and it's a really fun movie- especially in 3D. The movie focuses more on the character Susan (aka Ginormica) than I thought. And there was (without giving anything away) a really nice arc to her character that was unexpected.

The humor comes from every angle in the film. As you can guess from the trailer the Monster crew are absolutely hilarious with out relying on your garden variety pop humor this time. Just hearing BOB's laughs made me laugh. Even the villain Gallaxhar gets in on the comedic action... But I will say there are a hand full of scenes with the President (Steve Colbert) that were the absolute funniest bits in the whole film. Talk about quirky and out of left field.

The only thing that really bugged me was that all the humans, their vehicles and aircraft etc all looked very toy like in comparison to the really fleshly and organic looking monsters. That little disconnect was the only thing that felt odd to me. But I'm guessing it kind of all goes with the comic roots and that the fans will appreciate more than I.

There is a lofty setup for a sequel at the end of the movie, so if this one comes out strong later this month I'm sure you are going to see more MVA in the future. But it really is worth seeing and I didn't expect to say that going in.

Well, there you have your first look at what could be DreamWorks next animated hit. This isn't the only positive report I've gotten about the movie. I've had multiple comments about how much fun this film was. It looks like Jeffrey Katzenberg has another winner on his hands.

We'll know for sure when the aliens land on March 27th...
Posted by Honor Hunter at 1:12 AM