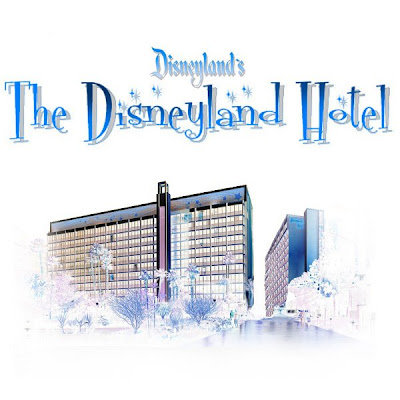 Except this one. The original one. The first one. The Disneyland Hotel.

It's something I've harped on since the beginning... something that's been a thorn in my side. Seeing it compared with WDW(the Floridian is essentially the DLH there), Paris, Hong Kong and now Tokyo with their amazing DLH leaves Anaheim's version a little to wanting. Okay, a lot to be wanting. I've always hated the look of those buildings. The inconsistent styles, the very nature of their structure which looks like three giant concrete blocks that got stuck in the ground and unable to be moved, so they decided to build rooms inside them. Now we know that's not how they were built there, but it's almost how I imagine they've remained there.

I know not everyone agrees with me, but I've always championed the Victorian(or Mictorian for the Uber-Disney Geek) style for a new Disneyland Hotel. Not exactly like the others, but in that style. I personally find it a very warm, inviting style that represents the calming influence of Walt's childhood... a place where you can go to bed and forget about the outside world. That said, I've also wanted the hotel built in a different location. Right where the Pick up Bus/Taxi area is. That would be a great visual icon for those driving down Harbor Blvd. as they go past the resort. It would also be a fantastic way to enter the resort. Imagine walking under such a structure and entering the Esplanade with DCA on your left and Disneyland on your right with Downtown Disney directly ahead. In my opinion, quite striking...

But neither of those ideas are being done.

At least not under the current plan which could see the light of day by the end of the year. Remember that is "could" because the plans have changed so often. But the plan that I'm sure some of you have heard about has them gutting the existing three towers with plans for an extensive remodel that reflects the 50's retro look of the original Disneyland Hotel... the one Jack Wrather built back in the fifties, not the skyscrapers we currently see. It may not be my favorite plan, but I can understand the nostalgic feel of recreating a 50's style building. Setting the design around the a look that Walt would/could have seen during the parks opening is a nice touch. If they're able to pull it off. I haven't seen the plans, but I've had them described to me and it could turn out to be a very nice refurbishing, although a time consuming one. From what I've heard, should the details be worked out the construction could begin as soon as the end of this year. Personally, I think that's a little optimistic and don't expect to see any kind of serious work going on till at least this time next year... but we'll see.

The Disneyland Hotel has gone through several proposals over the past twenty years. When Eisner and the Suits got hold of the property, it was considered for a while that it should be demolished and rebuilt anew(yet another mistake by Eisner). Then when the WestCOT project was proposed, the idea was to refurbish all the towers and build a new fourth tower. When that project was abandoned the version we got now was proposed and put into place. A version that modernised somethings and added a new paint job on the outside. Marvelous...

All the time the tower was getting older and looking noticeably uglier. There was a proposal made to redo the towers a couple years ago, to essentially take each tower down one by one and retheme them. But this wasn't a retro retheming... this was a more, shall we say, fantasy type of retheming that would be more in the style of the actual park itself. One of more whimsy you could say. Well, as time goes by the plans for that one changed as well and we are now in an advanced stage where the look will now be retro. Back to the future, as perceived by the past. Of course, it'll have better plumbing and HDTV which those guest back in the 50's could only dream about. Here's hoping that when it's announced that the Imagineers will have been able to pass through the mess that the Suits tend to cause. Which should be easier now that there are less of them. It also helps when they show plans to Lasseter and if he's given it his blessing then I have more hope for the project. So now, instead of me having pictures in my head of a Victorian/Steampunk Disneyland Hotel with dirigibles floating above it, I'll have to imagine a retro-50's Disneyland Hotel with families swooping around in jet packs. I'd like me a jet pack, that'd be sweeeeeet.

I think you mean "Jack Wrather." It was Wrather, the producer of shows like "The Lone Ranger" and husband of Bonita (for whom the Bonita tower was named), who built the Disneyland Hotel.

Jack "Wagner" was the famous "voice of Disneyland."

Paradise Pier is the one that should be razed first. I would build something of the scale of the GCH on that site, maybe with a bridge connection to DCA. There is so much space back there in the South West of the property just used for surface parking.

That new hotel could be themed in a Victorian fin de siecle style which would match what's being done at the Paradise Pier in the park.

The original 3 DL hotels could be overlaid with mid century modern as they seem to be doing, and reflect DL's Tomorrowland, which they already have a connection to via monorail.

Another hotel off Harbour Blvd on the Esplanade is a nice idea, but I'd worry about visual intrusion on Main Street, and from other areas in the park. I'm sure you would see it.

Finally, Disney should really buy out the remaining junk at Harbour and Kettner, and build a Radiator Springs styled hotel backing onto CarzLand.

Hello, as a Disney-architecture fan, I've made a few concept of my own of a Victorian Dlayout/refurbishment of Disneyland Hotel (with sketchtup)...

You could see some snapshots here http://picasaweb.google.com/gdgourou/GoogleSketchupDisneylandHotel_Project# (sorry french description)

If think that is layout is verry "possible"

^^^
you need to make the photos public

I agree with above poster that a Victorian style hotel would look most appropriate in place of the Paradise Pier hotel...it would significantly improve the view from within DCA and fit in with the new theming there.

If you look closely at the concept artwork for Westcot a large Victorian style hotel was among the proposals.

there any room for 4 disney hotel and beyound ? i am still wanting for this

I've always wondered, giving the themes of all the various hotels at WDW, that a hotel based on a castle look has never been built. Instead we have Polynesian, Victorian, New
Orleans, the awful Pop Century, etc etc. But no castle. Now which type of building is WDW best known for? Right. I know that I've lusted to stay in that room in the Castle, especially after seeing pics of it on TV. I'd pay top dollar to stay in a hotel with a similar theme. As it is, having stayed in a value resort and a "medium" resort, I see no incentive in upgrading on any possible next visit to WDW. But if a medieval hotel is built...just try to hold me back, that's all...

The Grand Floridian is a lot like the Del Coronado in San Diego, I would prefer any new DLR hotel design used other sources of inspiration instead of repeating what's been done. The Great Park Lodges are a good source of imagery to steal from.

well i want to know when disney will build a moderately priced resort, something akin to coronado springs or port orleans in florida...

^
They don't need to, Anaheim and Garden Grove are brimming with cheap hotel rooms.

The Grand Californian is modeled after the National Park Lodges. I think this could work. Go with the retro look and it ends up being the sort of Contemporary Resort of the DLR. Then go forward with the Mictorian idea over the transit plaza and design it to be THE premiere hotel on the property, and treat the original as like an homage to the past in that trendy retro look.

I agree that Paradise Pier could really use some help to match up with its adjacent land since it is probably the most visible hotel in DCA (more than Grand Californian in many ways). That could really use a Victorian style to reflect the pier. That would mean that the main new hotel off Harbor Blvd would have to be something different, more like a Fantasyland inspired hotel rather than the Main Street inspired Mictorian style.

This new hotel off harbor would probably prompt some more beautification, well it already has had a nice clean up and looks good so I'll say Disneyfication on Harbor Blvd. The reason is because Harbor used to be the front door of Disneyland, and the whole DCA expansion shifted the focus to Disneyland Dr with DCA and the row of Hotels and Mickey and Friends Parking. This new hotel, albeit awesome in location with the rest of the resort, would sort of be alone, which could set it apart, but its immediate surroundings, including a piece of Harbor Blvd, should do it justice.