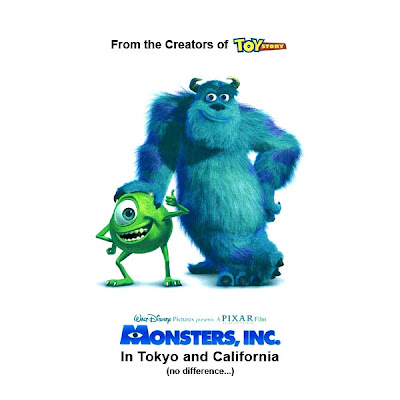 Through the miracle of modern technology(ehem, YouTube) you to can now see what Tokyo gets that those of us in America don't...

Like I mentioned in my "There are Know Secrets Anymore" article last year, it's going be harder to hide the difference in quality between parks in the coming decades. Technology has freed us. We can now see what was once hidden by oceans and time. The Walt Disney Company(under old management, we should remember) took advantage of its guest when it designed mediocre attractions for the stateside parks and then build lavish ones for Tokyo. It's something that those Virtual Shareholders I mentioned would be able to bring to the public's attention. Never again will they be able to design an attraction like Superstar Limo and expect Disney Geeks not be able to compare it with what the Mouse builds in Tokyo or elsewhere. It doesn't matter that Disney doesn't pay for these attractions since the Oriental Land Company purchases it. The fact that the OLC subsidizes the technology is a benefit which gives less of an excuse as to why a lavish attraction should be built. As I've said before, the new management is more sensitive to this issue and has been much more responsive in giving the American parks these types of attractions. Granted Disneyland is benefiting from it more, but WDW will start to show signs of this policy as well. The economy is the main obstacle in Florida and that is only a temporary delay. Patience...

Monsters, Inc. at DCA is here.

Monsters, Inc. at Tokyo Disneyland is here.
Posted by Honor Hunter at 7:26 AM

There may be improvements, but the money that would be put into that could be put toward another attraction and I believe the Suits and WDI would go for that instead. And I would agree with them actually.

I too think it's a nice C-Ticket, but when you realize what Japan gets it is rather upsetting. But the Monsters, Inc. attraction was designed prior to current management... if Lasseter had had a say in the attraction Tokyo's version wouldn't be that much different, if at all...

And the DCA version is really just a redressing of the horrible Superstar Limo so they weren't actually working from scratch.

Some big things on the board for WDW. Something Very Big May begin construction next year. Of course, that's depending on the economy.

The mouths don't even move on the DCA one. They just play the speech behind their heads.

DCA's Monsters is not much of anything...I have no opinion on it either way. Complete ambivalence.

But this Tokyo version is nothing exciting. I mean, what it is, another target-shooting thing, but with flashlights? I mean, this has been done so many times before, in MiB, in Sally's Scooby Doo rides.

What am I missing? What is new here?

Maybe I'm missing something, but I don't really see anything super different about the ride other than the mouths moving and shining a flashlight around.

(Although in general from what I've seen I agree that Tokyo's stuff is usually much cooler... not really sure about this specific comparsion though)

for the hype on the tokyo version i really do nto see anythign spectacular for a darkride.

I have to agree with some people that for the amount of money used on that attraction something else could be built.

As for DCA's version i don't find it anything spectacular as well but at least that version was meant to be a simple darkride. The one thing i would like to see done would be to change the Sully and Mike characters with ones that have mouth movement. That would improve the attraction quite a bit

Anonymous said...
"Maybe I'm missing something, but I don't really see anything super different about the ride other than the mouths moving and shining a flashlight around.

(Although in general from what I've seen I agree that Tokyo's stuff is usually much cooler... not really sure about this specific comparsion though)"

Sure, the Tokyo version is a D to DCA's C. The excuse can always be made that Disney is only doing a smaller version so it shouldn't be compared to the more expensive Tokyo version. The point is that Tokyo DID a D version while DIsney ONLY did a C version.

Interestingly enough, there's a preview of Tokyo's version on the new Monster's Inc. blu-ray coming out this May.

You want to know the difference between the DCA version and the TDL version... EFFORT!

Actually, it's closer to an E-Ticket. The ride cost over a hundred million dollars. DCA's was less than a third of that.

So if anything, it's a D+ Ticket at the least.

If that attraction cost $100m, then I think you can see why Disney is out of control. No way there's $100m of value in that thing.

I like the ride, not the flashlights. Very distracting.

I'll take two DCA rides (Monsters and Toy Story) over one Tokyo ride as the costs aren't that difference in this comparison.

Maybe you guys didn't notice, but the Tokyo version had superior animatronic technology then the DCA one. The DCA version was pretty much just mannequins on hinges with a moving arm or mouth. The Mike in the Tokyo had frighteningly realistic movements.

I agree that the animatronics are much nicer, but how many of them are there in the whole show? If you were buying these things from a company that has to be competitive, maybe it's $5m in figures...and I think that's a stretch.

Either way--fancy figures or no--the thing just looks like half-done. If the budget was really $100m, then half done and way overpriced

AA's cost a lot more than you think. 5 million for all the animatronics? I don't think so.

Have you seen Mr. Potato Head at DCA's Midway Mania? That's over a million dollars alone.

I think that DCA's version is a good C-ticket, and I love the effects of Randall changing colors and disappearing. And you gotta love Roz at the end.

At any rate, DCA's future is looking bright.

"At any rate, DCA's future is looking bright."

i dont think you can judge tokyos ride until you ride it.

Hey Honor, thanks for quoiting me in your last comment.

I also have to say, watching the video of Tokyo's ride, yes, it was a little saddening to see it and know that DCA's was clearly not as advanced, but if nothing else, looking at those animatronics just gets me excited about the possibilities of DCA's Little Mermaid ride and Cars Land.

I think it's a nice ticket, but when you realize what Japan gets it is rather upsetting. But the Monsters, Inc. attraction was designed prior to current management.