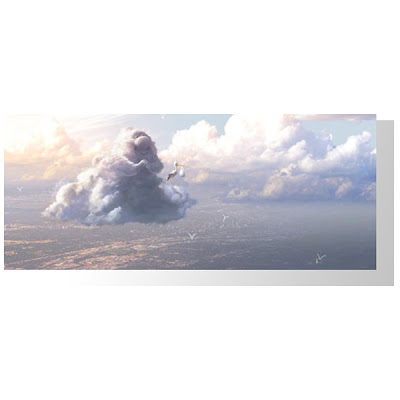 When I heard the premise for this new Pixar short: "Partly Cloudy" that would be appearing before Pixar Animation Studios' "Up" this summer, I wasn't that excited...

"Everyone knows that the stork delivers babies, but where do the storks get the babies from? The answer lies up in the stratosphere, where cloud people sculpt babies from clouds and bring them to life. Gus, a lonely and insecure grey cloud, is a master at creating "dangerous" babies. Crocodiles, porcupines, rams and more -- Gus's beloved creations are works of art, but more than a handful for his loyal delivery stork partner, Peck. As Gus's creations become more and more rambunctious, Peck's job gets harder and harder. How will Peck manage to handle both his hazardous cargo and his friend's fiery temperament?"

I mean, I have faith in Pixar because they're Pixar, of course! But that being said, I just thought how exciting is a cloud going to be? Or look? Well, even though it's very, Very, VERY rare... I was wrong. Once I saw the image above, I just went "Whoa, that's cool!" and had to mention it to you guys. My best wishes go out to Peter Sohn on his directorial debut with this short. He played my favorite character in "Ratatouille" and I'm rooting for him...

Honor,
What happened to the shorts that WDAS was working on? I haven't heard anymore about Glago's (I think that's spelled right) Guest or the Ballad of Nessie. When are we going to get to see these?

What a unique storyline! can't wait!

That pic is.. wow