Dastardly And Muttley In That Wacky Hollywood... 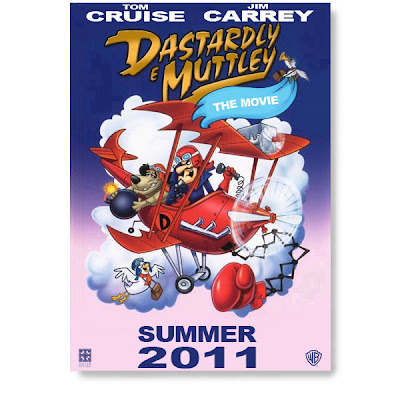 Why do we need another "Total Recall" (yes, I know the story was different and it required more of a Richard Dreyfuss type charcter but it was an okay movie for the time)? Why do we need another “Romancing the Stone”(Indy rip off, but I'll take it over KOTCS)? Why do we need another “Neverending Story” (not that any of these are "Citizen Kane", but c'mon!)? When will the story freaking end?!?! I thought remakes were for movies that DIDN’T WORK. They were for movies that had a great kernel of an idea but never quite came to fruition. In a year where we have some great cinematic achievements from “The Dark Knight" (yes it’s BATMAN, but oh what an original telling of the caped crusader it was)” to “Slumdog Millionaire”, why does Hollywood have to just regurgitate the same old stories in a new packaged form? The simple answer is that they are bankrupt of ideas.

But maybe that isn’t THAT simple. Maybe they have great ideas, but are afraid of getting behind them and rolling the dice. I get it, the economy is horrible, who wants to take a chance? But this has been going on LONG before our economic melt down, so that is just an excuse. Hollywood has been doing this forever. In the 80’s with the birth of video, you used to be able to make a poster, a one line pitch and get funding for your movie. In the 90’s you had a poster, a one line pitch and when you got the money you put a down on a house (kinda déjà vu) so GOODBYE PRE-SALES. But now, if you don’t have the poster, a one line pitch, the first 30 minutes of the film shot and a letter saying that Tom Cruise is signed (not attached), forget it. The 70’s brought us masterpieces in film, why? Because the artists were left alone to create (although having a limited budget helped them – a big shout out to George L and Steven S if you’re listenin’).

The money people (suits) left the creative to the creative and only got involved when they could throw their weight behind a project for it to be a positive effect not a negative one (and that meant staying out of the creative soup). Now, with Hollywood churning out more comic book and video game movies (yes, I know they have a fan base – automatic $$$$ - but if you could just stop the pop cultural referencing Kevin Smith), that allegiance is gone. And what we have left is people who grew up in the 80’s running studios, calling the shots and by darn it if they loved “Dastardly, Muttley and the Wacky Races” growing up, well then that would be a swell movie idea – hot damn, let’s put it in development, no….better yet, let’s start shooting the f***er!

I hope that after Danny Boyle settles down from all the oscar hype, he like many artists take a stand (I am talking to you Darren A). Now he has the cache to do so, PLEASE for the love of God, don’t “go Hollywood”, stick to your guns and create original stories like “Sunshine" (2001 rip off)”, “Trainspotting (gotta love a post modern "Clockwork Orange"” and “Slumdog” (a conventional love story, but the technique in which it was done was unique, you gotta give it that – and the music! Wow, what an oscar night, unless you are Peter Gabriel). And maybe if Danny Boyle doesn’t get his phone ringing by then, he could always do a “Trainspotting” sequel called “Porno”……no? Okay well what about a sequel to “A Life Less Ordinary” perhaps? Too on the nose? Well what about if all else fails “Sunshine II – The Return?” Oh, they all died in the end, I remember now…well maybe a live action Dastardly and Muttley wouldn’t be such a bad idea after all…no? Well maybe if it had Tom Cruise attached…
Posted by Colonel Kurtz at 12:02 AM

I couldn't agree more. These executives running studios today are a bunch of spineless jellyfish. You forgot about Will Smith for the Nemo prequel though.

I, too, agree. Sadly, when the bean counters took over running the studios, creativity left and was rarely, if ever, allowed to return.

Thank heavens for my video collection. I have something to watch whenever the fare at the local theater or on TV is somewhat less than stellar.

Sadly, that is more often than it used to be.

You people need to seriously get a life. Bunch of whining, crying babies. If you don't like it then go out and show you can do better. And don't give me that crap about not having connections and all. Life is tough. Find a way to make something to show these execs that they're wrong or shut up! Either don't go and see their stuff or make something that proves your point. What a bunch of victims. You're the ones that are spineless.

I thought Friday the 13th was the Neverending Story. Talk about pointless remakes and re-imaginings...

Amen, Honor. This is exactly what I think of the state of films today.

This post wasn't done by Honor. It was done by someone named Colonel Kurtz. Check the bottom of the article to see who posted them.

I thought it was Colonel Mustard in the library with the candlestick?

He must have an Apocalypse Now fetish.

Look at it this way. Would you have limited Lord of the Rings to only one novel, or Star Wars to only one film, or Watchmen to the first twenty pages?

Now you can say that that's different, and that those stories were written to be chapters in a saga. But stories that are chapters in a saga are conceived and contrived no differently then a sequel made years later. As I said in another post, storytellers tell stories. They don't care what the studios want in as much as they have to sate them to get their stores told, but they'll tell the ones they like, the ones they want to make up themselves or the one's the want to continue. Because it has a "Part II" at the end is irrelevant.

The same creative fire that makes a storyteller want to make Howard the Duck Part 2 is going to be exactly the same type of fire that makes Tolkien write The Two Towers. It doesn't matter that they are not on par with each other, or even in the same universal scale of quality. A storyteller just wants to tell his story. Nothing more, nothing less.

Oh Honor Hunter you forgot to mention the Robocop remake.

Dude, Honor didn't write this one. Check the bottom of the post to see who the author is.

I did not appreciate the unnecessary language presented in this blog post.

Geez, if you were offended by the language you better stick to Mickey Mouse Club, boy!

So I take it you're against the TRON sequel? I mean, that would be wrong too, right?

A sequel isn't bad if it continues the story and is as good as the first movie. If it's just rehashing the first story in a different way, why bother? I don't see why remakes are made of movies that were good the first time around or have become classics. I'm really sick of movies being made from old TV shows. I won't go see them.

If the studios are supposed to be giving the audience what they want, then they should pay attention the the whining, crying, complaining babies. They chose a career in filmmaking, so do it right.

Those whining, crying babies are the ones who buy tickets and buy the merchandise. Give them what they want and you've got a movie that can potentially make as much as The Dark Knight. Give them a crappy sequel or remake and it will die from bad word-of-mouth and the merchandise will be cluttering the clearance isles. Just slapping the brand name on a POS film like G.I. Joe doesn't mean that it will be embraced by the fans who will support it and buy the toys. You alienate your core audience and you are pretty much done. Warners realized this after they nearly destroyed the Batman franchise, now they are atoning for it.