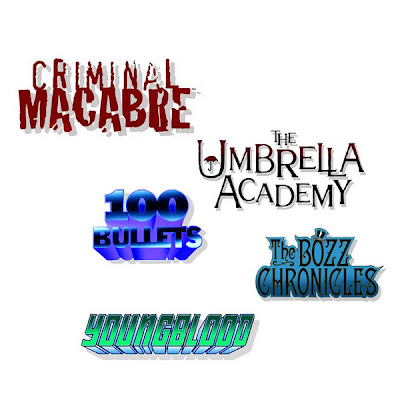 Well since my "Without Tights" post last month, there seems to have been a lot of movement on comic book properties...

Granted, some of these were already optioned, but they seem to be getting renewed focus of late. As Febreary's Variety mentioned about "Youngblood" being turned into a film by Brett Ratner. Uhm, that's not exactly what I meant, but I guess it's moving forward. Ratner has made a whole lotta ehh and adequate stuff over the last few years. I hope he knocks it out of the park on this one...

"The Bozz Chronicles" were in development in the earlier part of the decade and have languished of late. I hope that Disney notices this property and the fact they have Zemeckis in the House, he was developing it before... perhaps, again?

And then there's "The Umbrella Academy" that has been in development over at Atomic Fox for a time now. Actually, someone over at AF really likes comics because three or four of the titles I mentioned are optioned by them alone. In fact, so many of the comics I mentioned have been optioned that there aren't that many of them the Mouse could option! So maybe it's time I came up with another list? Probably... I'll have a part-two up by next week. But Disney better pay more attention when I do.

Because Hollywood is grabbing onto these properties almost as soon as the first issue hits. Comic books are the new "it" thing. Until one crashes and then they'll move on like a one night stand, but I have a feeling it may take a while(I say three or four years which is an eternity in Hollywood years). As long as films like the "The Dark Knight" are making a billion dollars, even Suits will have a little patience. I know Kingdom Comics was supposed to fill part of this idea void(the first title isn't to be revealed till Comic-Con this summer), but there are several great comic books still out there and a few that aren't yet published.


In the words of Moe the Bartender...

well I thought Disney was about setting trend. ;)

Disney should make a movie about "The Life and Times of Scrooge McDuck"!

What is the status of Disney's deals with Slave Labor Graphics?

Do they still own CrossGen comics?