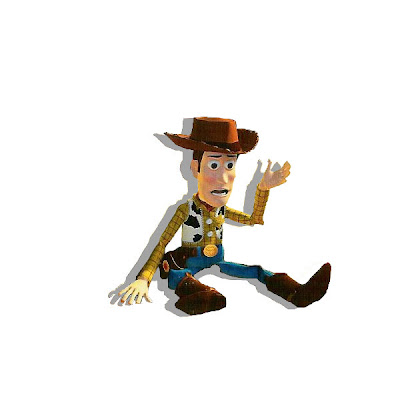 An the Annual Shareholders Meeting Tuesday in Oakland it was revealed that the Board had taken a trip to Emeryville to see the Pixar campus...

While there they got to see a work-in-progress print of "Up" that was enjoyed very much, but the surprise cherry on top was seeing a scene from next years "Toy Story 3" that gets me wondering:

Will we see a trailer for it attached to Up?

Such has been the case for the majority of the last decade with each previous film: there's always been a nice trailer for the following one. So do we have a little more than two more months before we get our first glimpse of Woody and Buzz in a decade?

I've sent messages to several Bothans and am patiently waiting(NOT!) to hear back from them regarding this summation.

I have seen a trailer about toy story 1 and 2 in 3d, and at the end of it, it mentions Toy Story 3 and has buzz and woody talking about it. I saw this trailer in the Roy O. Disney building at the Disney studios.

I have a feeling we might see a trailer for the frog princess instead of Toy Story 3 but I could be wrong. Maybe the trailer about toy story 1 & 2 in 3D and a hint of Toy Story 3 like the other poster mentioned?