A Happy Medium For Animation? 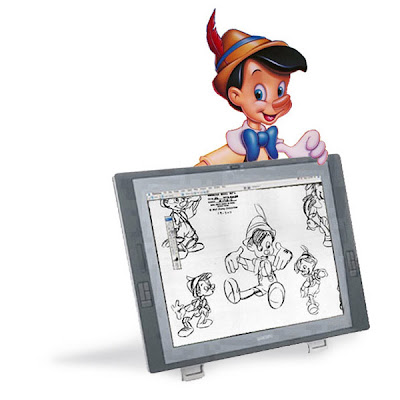 Ok, so we got word from WonderCon that Disney plans on releasing a CG film every 18 months and a hand drawn film every two and a half years...

Now I've seen where some people are making a fuss about this. Wondering why it's going to take almost twice as long to make a 2D versus a 3D film really misses a great deal of what this says about Walt Disney Animation Studios. That winds up being at least six CG films over a decade and at least 4 hand drawn over the decade. Add those up and then divide them by a decade and what do you come up with? One new Disney animated film every year. That's pretty cool. That's the way it was planned in the 90's but many of those pictures didn't live up to the critical and box office pressure of expectations that comes with the Disney name. I don't think that's gonna happen this time around... bean counters and Suits without any creativity won't be sticking their noses in on story meetings. People that love film, love story and love animation will be the driving force in these films over the next decade.

If you've looked at the reports of the "The Princess and the Frog" panel you'll also note what was said about films coming down the pipeline for Disney Animation. Marlon West talked about the backlash/stigma against animated films with CG in them(I guess like the ballroom scene in "Beauty and the Beast"). From what he says, Lasseter is fully aware of the fans getting tired of everything being computer animated. Which is why P and F will have almost no computer animation in it. It's trying to make a statement that story is king... that story matters most of all. Not paint, not pixels. STORY.

But the film after that is making a statement as well. Disney's 2010 release, "Rapunzel" is boldly professing something that is directly opposite while being entirely in line with Princess... Not all computer animation has to look like computer animation. It's going to become far more painterly I believe and I have a little premonition that you're going to notice the difference between a Disney animated film and a Pixar animated film, in a good way. John seems determined to make sure that they don't just come off as indistinguishable parts of one company, but two uniquely individual houses of story. And it will show in the films they create. The one thing they will have in common is quality.

And as the next few years pass by you're going to notice something else... many of these films, the hand drawn ones, will become hybrid films as West calls them. Ones that use computer animation, but in subtle ways that you won't be able to notice. And then there will be the subterfuge film. This will be the film made by WDAS that everyone loves and no one can understand how it's made. Because it's going to look like a hand drawn film, but it's going to be a totally computer generated film. Parts of it can happen now. Just look at "Bolt" with some of the backgrounds. Parts of will happen next year. The style of animation that "Rapunzel" has is going blow people's minds, trust me. And then, in the coming years some of the films that your going to see are going to surprise you. Because as much as many of us want to get back to films like those in Disney's Second Golden Age, this one's gonna be different. As much as I think the stories are going to be better, I also think the animation gurus in the Hat Building are planning on stunning us with what they're going to be able to achieve. Parts of this is just my hunch and parts of it are whispers that I'm hearing... put it together and this is the inevitable conclusion I come to.

I can't wait for it all to unfold in beautiful layers of both brush and pen...
Posted by Honor Hunter at 12:21 AM

It's going to be an interesting few years ahead then I guess to see where things are heading.

Definately a good idea to keep both the story AND art of the films contrasting between the two studios. That's why I've been praying for a return to Disney's "roots" (i guess).

I'm preparing to be stunned.