On May 29th, What Will You Celebrate? 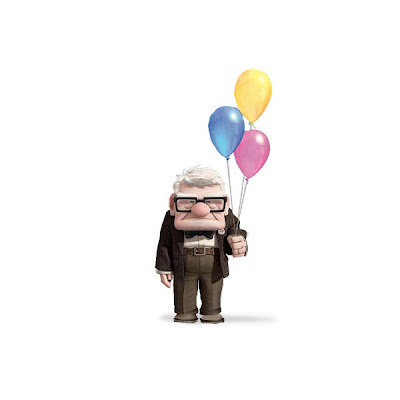 I've been getting some comments from a few people that have seen Pixar's new release "Up" and they couldn't be anymore positive...

From the reports I'm getting it sounds like Pete Docter has knocked this one out of the park. In what could be Pixar's most funny film there are a surprisingly large amount of deep and reflective scenes that you could classify as adult. And not in a naughty way, but a sophisticated, mature, poignant kind of way.

I've had more than one report of tearing up in certain scenes. And as usual, Pixar films are known for their wonderful secondary characters and this film is full of them. I can't wait to actually see this in theaters...

I keep trying to figure out how they could possibly top WALL-E but Pixar very seldom disappoints me so I'm sure they'll manage it some how.

I believe they planned it that way Anonymous...

May 29th is my friend's birthday as well other Anonymous! We are definitely celebrating by seeing the movie! I can't wait!

And now Disney can market it as a wacky adventure filled with zany antics, frenetic animals and "funny-looking" people. After all, that's what Disney does best!

Bring it on, Disney Marketing ... here's another one for you to absolutely misrepresent and ruin! Because, you know, the "high concept" of an elderly man fulfilling his dreams by sailing away into the heavens is easy to convey in 10-second spots and outdoor advertising dominated by REALLY LARGE LETTERING.

Just put in a couple of fart jokes, and that should do it for you. After all, Disney is the king of marketing animated movies. Time to show your stuff again!

Wow Ty. I know Disney Marketing probably deserves alot of that agression (which company's doesn't?), but the promo work for UP so far has been pretty classy don't you think?

Yeah, the marketing for "Up" has indeed been pretty classy, but I share Ty's anger for Disney marketing overall. Remember those cretinous ads for the DVDs of Lady and the Tramp and 101 Dalmations? In the former ad, the bulldog belches (didn't happen in the actual film). In the latter, the horse farts (ditto). In both cases the petty greed and disrespect for the Disney classics oozes like a putrid sore. Ads like that didn't make me think very highly of the new guys at Disney. Are they so desperate they feel they have to imitate Nickelodeon to make a buck?

What is up with Squirrel?