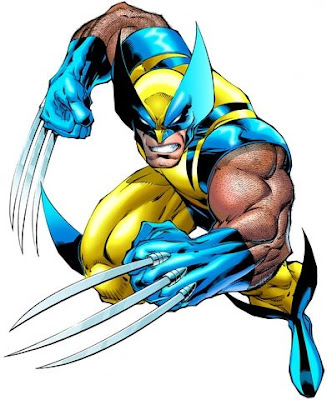 The new trailer for "X-Men Origins: Wolverine" is up
thanks to to USA Today...

But you might want to put on your reading glasses because it's really small. Here's to hoping the film is great. I think Hugh Jackman is a great actor so long as he's not teamed up with Stephen Sommers...

Sheesh, I hate all the prefaces before the title. Why can't it just be Wolverine? Does anyone not living under a rock NOT know that he was part of the X-Men. I'm gonna hate Captain America if they really do have that "The First Avenger" before it. Can you imagine if they had done Batman or Superman the same way with "The First Justice Leaguer?" Suits... sometimes you just wanna beat some sense into their brains and then you realize: "Oh wait, they don't have brains!"

I read the original draft of Wolverine, but it's clear from the trailer that it's been rewritten. I like the version I read a lot. It was very good. One of the few things I didn't like was the bone claws, which come from an issue of the comics... one that I don't agree with for sure. The claws in most of the Wolvie canon are mechanical and added when he gets his bones were coated with adamantium. It just makes a more logical argument for me, but that's me.

I haven't really been impressed by the trailers for this film yet, but I'm still holding out hope. Gavin Hood is a talented young director and I'm hoping he'll prove himself capable with bigger budget material.

As for the bone claws... I never really liked the idea much myself, but like it or not they've made they're fair share of appearances since that issue (I'm guessing you mean the one where Magneto rips out the adamantium) and have become part of the character's backstory. Still doesn't make them a good idea though.

That's just as bad an idea as organic webshooters in the Spidey films.

Now organic webshooters didn't bother me. It kinda made sense that if he has super-spider strength and senses as well as being able to climb like a spider it would also make sense that he could shoot webs like a spider...

If he was like a Spider he would of shot webs out of his butt. So out of the wrists, totally implosibble. Well so is a man that has the DNA of a spider! lol

Wolverine was grafted with adamantium to his bones because of his mutant healing ability but I don't buy that the claws are part of his genetic mutation just as I don't buy that Spiderman can fire organic webs out of a gland in his wrists. Yeah so these guys have a mutation that gives them some superhuman powers but the point was to augment their superhuman abilities beyond their own genetic capabilities. If you subscribe to the idea that everything is part of their mutant abilities you might as well make Spiderman an eight legged arachnid and Wolverine a werewolf.

William Stryker said: "If you subscribe to the idea that everything is part of their mutant abilities you might as well make Spiderman an eight legged arachnid and Wolverine a werewolf."

Shhh... there may be Suits listening. Don't give them any ideas!

The bone claws have been around for a long long time now. Its hardly an issue anymore. I'm suprised it's a problem for you guys because I haven't heard a lot of people asking about this.

As far as I'm concerned he always had claws, otherwise why were they\how were they added? The adamantium was to make him indestructable soldier not to attach a few blades.

It'd be interesting to see how they've handled his history.. and to see how much thats going to screw up his comic history in the future...

Mind you the Organic web-shooters were something tacked on specially for the film, which was not so good.

^ Swatsi QFT - What I'd consider the true Canon for Weapon X began with Marvel Comics Presents in issues #72-84 way back in 1991, and there was never any mention of adding claws, nor would it have made sense - the 'X' in Weapon X was explained several years back to be the Roman numeral for 10, meaning if the claws were part of the program, why aren't there any other of the experimentals with claws? And when they tried to clone Wolvie and introduced X-23, his "daughter" a few years back, she also came with claws, since it was in his DNA, including a newly evolved one in her foot that surprised everyone...

Sorry, way old Wovlie fan here, with 20+ years of his comics on a shelf for easy access! :-)