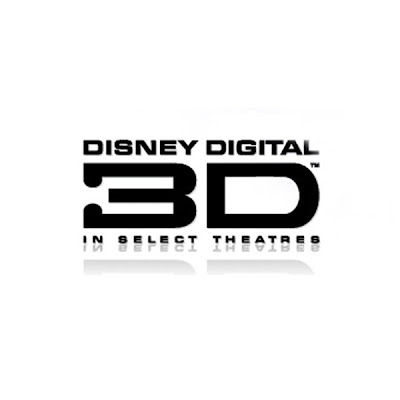 Big on 3D. BIG. The Mouse has fully committed to astounding and assaulting your eye sockets over the next few years with seventeen films coming out in 3D between now and 2012.

I wasn't there, but I've heard back from people that were and you can get more detailed responses to the footage at Latino Review and Ain't It Cool News if you want to go into the minutia of it.

From what everyone is telling me, the "Beauty and the Beast" test that they showed really knocked the audience off it's socks. Now, if they could just get past having to wear those glasses... I hate wearing those glasses.

There was info about "TRON," but no new trailer... probably going to have to wait for Nerdvana(read: Comic-Con) for that.

The production artwork for both "A Christmas Carol" and "Alice in Wonderland" is said to be amazing and darker than what we're used to from Disney. There was a still from "Toy Story 3" that has a very sardonic feel about it. Wood from behind, looking around Andy's room with posters and pictures that a teenage boy would have. A boy that wouldn't be playing with cowboy dolls anymore... Interesting.

And several other announcements related to upcoming releases. Click on the links above for more info.

I think the films coming out this year are interesting, but starting late next year through 2012 we're going to get some truly radical and very cool Disney films, both animated and live-action.

Well, how else do you expect the technology to work? ;)

Besides, the glasses that they use now are certainly better than the old blue/red design.

There is a way to make it 3D without the glasses...

Read the article by Quint on Ain't It Cool News and he mentions talking to techies that are working on it.

Within the next decade my friend...

At Disney's Doorway to Dreams near Chicago (A DVC preview center), they have a large TV-type screen that is 3-D... without glasses. When I first saw it casually walking by, I was stunned. The image was a just a little blurry, and you had to be standing just in front to see it right, but it was very impressive.

3-D is so gimmicky. It sucked in the 80's and it still sucks. Until they have holographic projection they should just forget about 3-D. Nobody wants to wear the dorky glasses anyway.

I heard Toy Story 1 and 2 in 3D will now be a double feature shown for a two week period.

Gimmicks are not necessarily a bad thing. Television was a gimmick when it first came out.
It all depends on how well they are used, and how often.