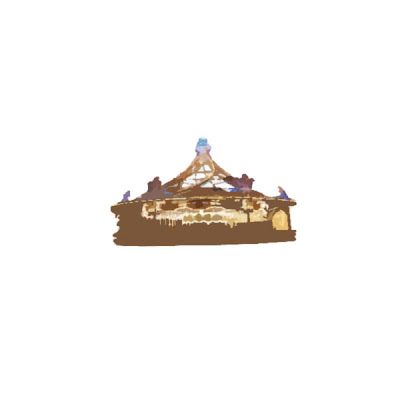 Now this really isn't a Blue Sky Buzz report, so much as it's just a reminder of what's happening tomorrow...

Hopefully you rode King Triton's Carousel lately, because it goes down tomorrow for a couple months of refurb. Are they going to be putting that beautiful cover that you saw on display at the Blue Sky Cellar?

It is getting a makeover, but that elaborate roof that was originally planned has been put aside for now. WDI and the Suits have decided that the money they were going to allocate to this project will be put to better use going in attractions. Now, as much as I want to see that beautiful roof over KTC , I'd rather see it put into making an attraction better and more detailed in theming. Also, this doesn't mean it isn't getting anything. There will be a new canopy put atop that will blend in with Midway Mania far better, some new technical electronics for safety concerns and the area is supposed to be repainted to match the look of the new boardwalk area as well.

I would have really wanted to see the new roof Imagineers proposed going up, but it's not the end. The people inside of the project and the Makeover would still like to see it as well. Which is why we might see it in the next phase of the resort project if this one goes well. So don't think of it as not being built, but postponed till a few years later. This isn't uncommon, as many projects for the original park either didn't get build initially or something else eventually replaced it.

So the Carousel is getting "plussed" like the rest of the pier, it's just not getting as much as we would have liked. Thankfully, it's not for cutting corners though. It's so that those attractions being built don't get cut like they did in the 90's under "He who should not be named." It's nice that the new attractions aren't being stripped of what makes you want to build them in the first place.

I hope they don't remove the references to the classic Southern California seaside amusement parks around the top of the ride.

Any info on the beautiful concrete fountains next to the carousell? :)

I think the carousel itself looks nice, only the surroundings need a makeover...

I'm surprised that the carousel isn't being relocated to be part of the Little Mermaid play area next to the attraction.

Are you surprise that that would cost a lot of money? Then don't be.

But they are obviously spending a lot of money on DCA, and I'm surprised that if their philosphy is "do it right, or don't do it" (Walt's philosophy and supposedly Lasseters), why not relocate it to a more appropriate locale. And I don't think it would cost that much to move. A Carousel is not a heavily anchored attraction. There isn't an underground maintenance facility or anything. Take it apart, truck it down the sidewalk, put it back together.