The Mouse May Have A Stoneheart... 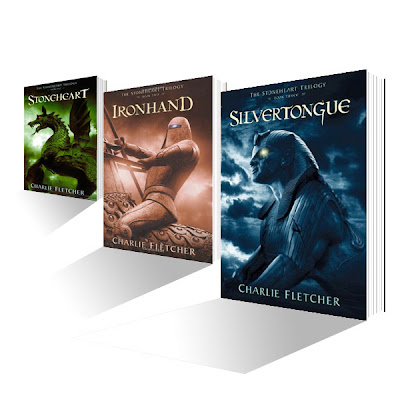 Walt Disney Studios and ImageMovers are currently working to pick up rights to "The Stoneheart Trilogy" for Robert Zemeckis to produce according to The Hollywood Reporter...

The novels are about a twelve year old boy in London that finds an alternate world where statues have souls and come to life. The boy finding the place upsets the balance between good and evil and has to work with an orphaned girl and statue of a WW I gunner to put the world back into balance.

More MoCap madness from Zemeckis, who now seems to live in an alternate world where he doesn't have to deal with actors as much...
Posted by Honor Hunter at 7:11 AM

I find that last sentence to be overly snarky, and a bit mean-toned.

Also since Zemeckis spends MORE time with actors on a motion-control stage than posed and drawn animation directors spend with their voice-talent, I guess that snark goes doubly-so for Lassetter, Bird, Stanton, etc?! They must REALLY not want to work with actors?

Listen, I'm not a fan of any Zemeckis film since Gump. But I think it would make more sense to say that Zemeckis seems to enjoy the mocap process more than he enjoys the limitations of live action production.

Because, you know, the one thing he HASN'T done is remove actors from the mix. That's Tom Hanks and Ray Winstone in the Mo-Cap suit.

Fully agree, Anonymous. If it ain't Pixar or something blessed by the Golden Boys up north, then it's likely to get the Honor "Snark Attack".

Sure, Zemeckis isn't the director most of us grew up with, but how many animation directors could spend two years on an island, with an actor and a crew. It might drive any of us indoors for a few years.

Anon#2 - What the heck? Where in the world did Pixar come into this discussion? This imagined "Perceived criticism against anything not by Pixar must come only from Pixar fanboys" is getting ridiculous.

You do know Honor listed Kung Fu Panda over WALL-E in his favorites of 2008 list, right?

I for one think Zemeckis is still a talented guy. I only wish he had decided to persue a more deserving series. I've read Stoneheart and it's fairly mediocre, although I suppose the sequels might be better. Why do the studios always option these YA books that have barely been released (and therefore barely had time to establish a fanbase) rather than time proven classics? I'd be much more interested (and I bet others would be too) if Zemeckis was doing a MoCap version of say The Book of Three or A Wrinkle In Time.