The power of the Tessaract... 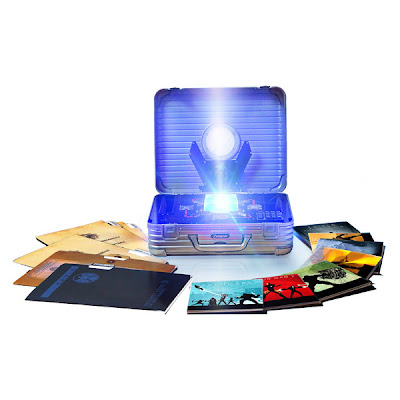 Now this is incredibly enticing...

The first series of films produced by Marvel Studios is coming out soon in its own geekly inspired, awesomely done boxed set and it's a sight to behold.

All comprise the "Marvel Cinematic Universe: Phase One" that you can pre-order here. I have some of these films and I still want one of these sets. It's a shrewed move by Disney/Marvel producing this collection and it'll be interesting to see how many people will be willing to put down the $219.00 (on sale for $139.96) for it. I have a feeling that even in these financially troubled times there will be a great deal of people that are still willing to pay for dreams. And these are very pretty dreams.

And being forward thinking like I am, it makes me wonder what Marvel Cinematic Universe: Phase Two will consist of. We know a good deal already: "Iron Man 3," "Thor 2," "Captain America 2," and "Avengers 2," which adds up to four films. If the second box set consists of the same number of films, then there are two other films that will be part of it. Will we find out this week if "Guardians of the Galaxy" is one of them? Or maybe "Ant-Man" or "Black Panther" will be announced at Comic Con? We'll know soon enough. But until then, you can just salivate over these lovely little discs boxed up in pretty packaging.