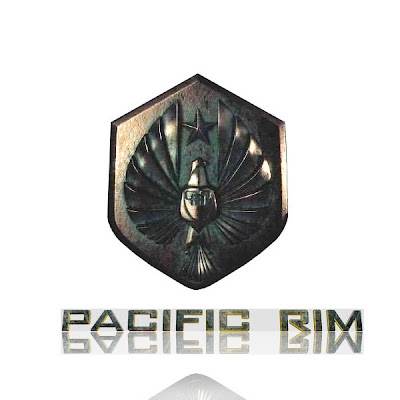 Not even in the slightest. This is something new, and unto itself. Holy, wow. I mean, you know I love Guillermo del Toro. I think his work is amazing and I still want him to direct that "Haunted Mansion" film, but with this he's definitely moved forward into a pack that few directors occupy. And in this environment, at this time, well let's just say that Comic-Con is a world unto itself. And Guillermo is a god here. The crowd hailed him as a conquering hero when he walked onstage to present footage/effects from "Pacific Rim."

He could have had roses thrown at his feet as he showed clips from the giant robot (Jaeger) versus giant monster (Kaiju) film. There was footage shown of a battle with the creatures, but you never really got to see it in full scale or entirety. But the scope of the destruction and battles was clearly evident. And it had del Toro's style all over it. His talk was filled with the typical humor he uses, and it feels like a friend telling you about his favorite project, not some distant film maker that happens to be trying to impress you with his latest masterpiece.

I love how when he describes the way he wants the robots to move that he mentions how they should move and why. He explains things like he's thought them out, not just trying to throw something up on the screen. And with the monsters, how he wants you to know them from the inside out, like he's been examining their physiology as a scientist. It's the same way I've heard him describe that "Frankenstein" project that he's been working on for years.

My only fear, not for the film really, but more for Legendary is that this film will make "Godzilla," which was also announced today, an afterthought. It's going to have to go in a completely opposite direction if it's not going to be perceived as underwhelming for audiences after this. Guillermo mentioned that this will be the only footage released for sometime, so attendees got to see it first until late this year/early next. And I can't wait to see a full on trailer for this when more fx work is done. I can't wait to see the battles that this mighty hero has planned for us.

Because they are going to be EPIC...
Posted by Honor Hunter at 6:24 PM